Last week I ordered some sashiko thread, the red spool you can see in the photograph. I have been longing to make something a bit more textural than the quilts I’ve worked on lately and I remember how satisfying it was to stitch the quilt I called “A Dark Path”, to commemorate an accident I had about this time of year in 2018 when I fell on ice in Edmonton, cracked my coccyx, and set into the motion the process of retinal detachment. I wrote an essay about making the quilt and I made the quilt to work through the territory (emotional, visceral) in the essay. Sashiko means “little stabs” and it’s mostly a technique for repair and making a garment sturdy through those repairs. (I wrote about the process here.) That quilt was not intended for a bed or even the back of a couch where someone reading or watching television might reach for it to drape it over shoulders for extra warmth. There’s nothing cosy about it. It should be hung from a dowel but so far I haven’t done anything with it but fold it and tuck it into my mother’s camphor wood chest. 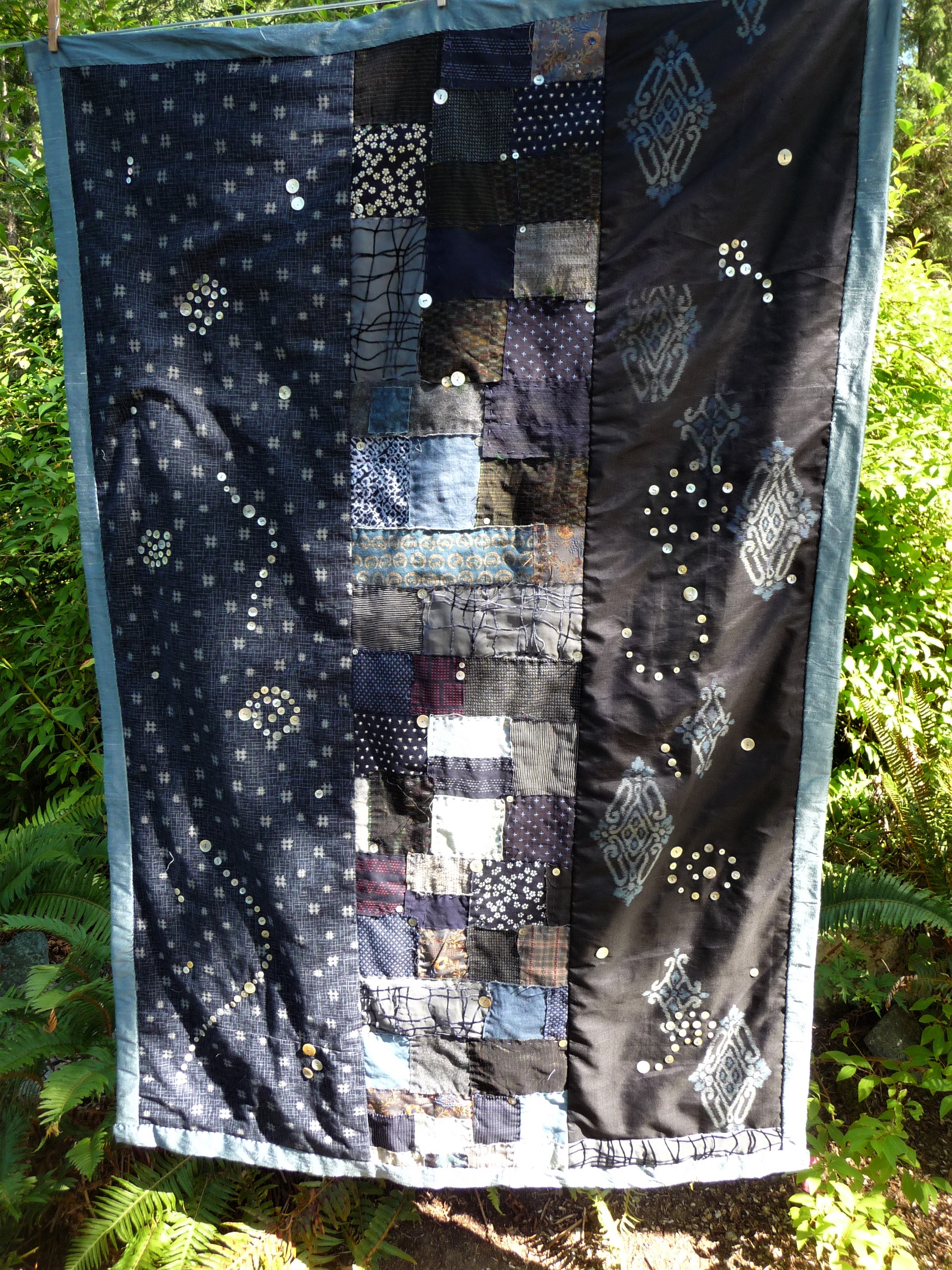 When I ordered the sashiko thread (2 spools) last week, I tagged on an order for a package of Japanese momen, strips of loosely-woven cotton fabric intended for sashiko work. The package arrived earlier in the week and I opened it, utterly taken by the beauty of the ten pieces, all different, all various blue prints. What would I make, I wondered. I have some other blue fabric that has been sitting in a stack, waiting, waiting. I realized at once that I don’t want to cut the momen. I don’t want to waste even a thread. So that means strips of some sort. Yesterday I got out a scrap of paper and began doing the basic arithmetic to determine the best way to use these new (and kind of expensive) cottons with my cheaper but still beautiful stack to build a quilt top I’d be happy stitching over the winter. Stitching with red sashiko thread and the ridged sashiko needles I bought for the dark path. One of the anticipated pleasures is that sashiko is a plain stitch, a running stitch, which is what I do anyway, but its beauty is in its strength and maybe not so much its uniformity.

Anyway, these are the things I’ve been thinking about and then in yesterday’s mail, a wonderful gift.Beth Kaplan, a writer I’ve become close to via the wonders of the Internet, sent me this issue of uppercase: 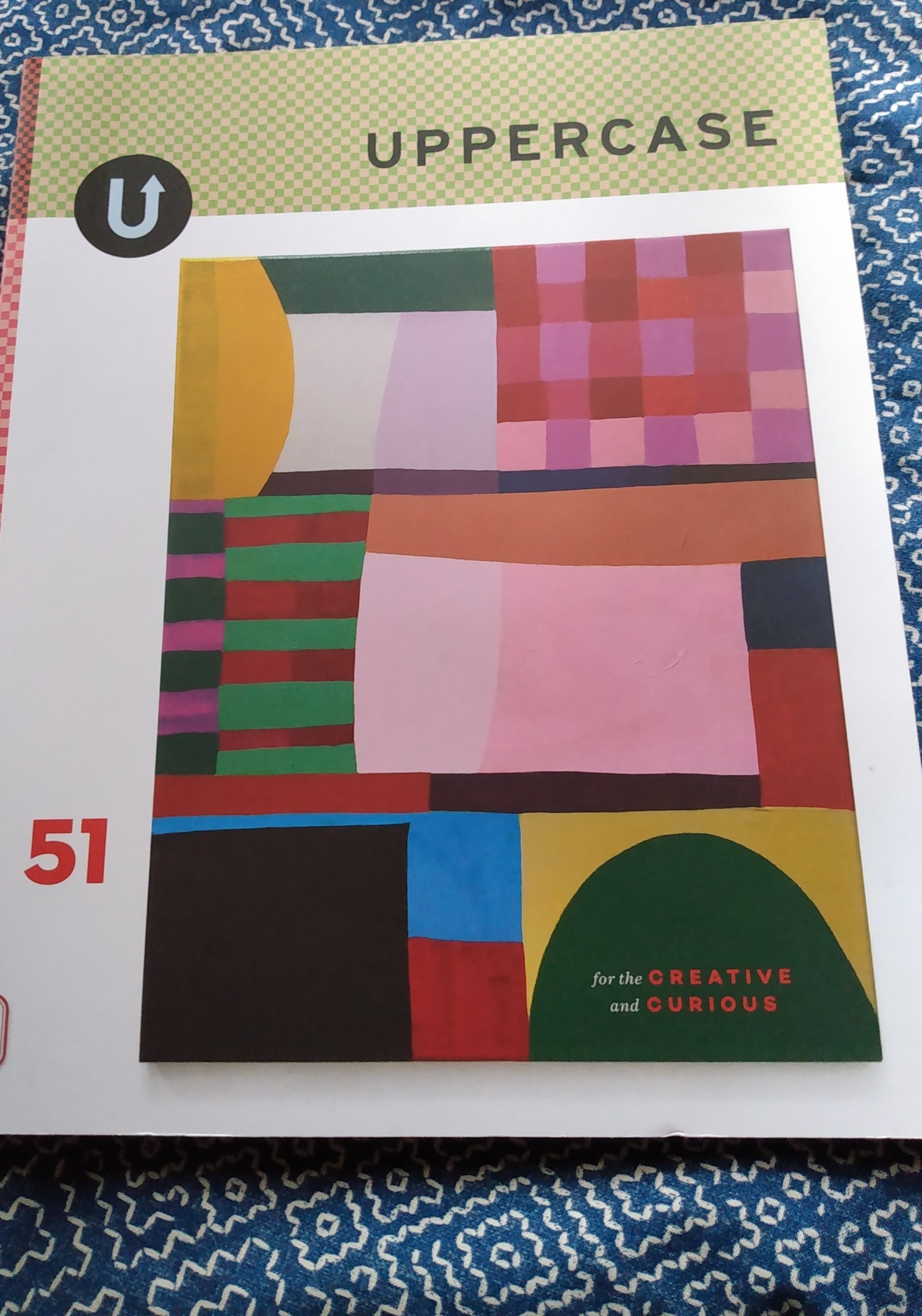 The whole issue is devoted to quilt and textile art and although I’ve only begun to read it, I spent an hour yesterday just looking at the images. Some of them are just so ravishingly beautiful that I felt that tingling, both in my hands and in my imagination, and I wanted to make something new. I’d begun the arithmetic, yes, for a quilt using the Japanese momen, and I’d envisioned horizontal strips, the momen supplemented with other cotton, but having looked at the wildly original work in this magazine, I realized I could shake up my ideas about structure and maybe try something more original myself. So in the night, awake, the moon lovely and silver in its first quarter, I thought, Why don’t you turn your horizontal strips and make them vertical? Why don’t you insert pathways between them, using deep red, a colour you will need in winter as the last rose hips are taken by squirrels and the tulips are only a promise in the pots in the greenhouse? Why don’t you try something you haven’t done and why don’t you see where it takes you? Why don’t you.

And that’s how it begins.

6 thoughts on “how it begins”