Every time we talked to our grandson E. during the pandemic, via WhatsApp, he would ask about our school bus, the one in the toy basket in the room the grandchildren sleep in when they visit. I’d like to say it was the Fisher Price bus our children played with but that disappeared decades ago. I found the bus we have now in the Salvation Army thrift store in Sechelt. It isn’t exactly the same as the one we used to have but it’s close enough. And E. loves it. I’d hold it on my lap as I talked to him, wishing I could hold him instead, and inevitably we sang the bus song.

E. turned 3 in July and I knew last spring that I would make him a quilt. Not for his birthday; I probably wouldn’t finish it in time. But as a gift for turning 3, to graduating to a proper bed, and because I’ve made my other grandchildren quilts. In my more sentimental moments, I think of them as surrogates for the affection I would like to demonstrate to them daily, in person, but that’s not possible. At least a quilt holds the memory of my mind thinking about them, my hands sewing. Stitches can hold love as tenderly as a heart can.

The thing is, I make quilts, I love to make them, I have the next one always in mind as I stitch the one in progress, but I’m not very skilled at design, preparing materials, and the actual piece-work and sewing. You can tell. Seams don’t align. There’s no consistency to my stitches. And although I have ideas, taking them from my imagination to actual possibility is often a bit fraught. For example, of course I wanted to make E. a school bus quilt. I don’t use templates or patterns (although perhaps I should). So I thought about how to design something I would be capable of constructing. I wanted faces in the window of the bus but…embroidery? I’ve never really learned how to do that. Buttons seemed like a good solution. A blue panel for sky, with clouds quilted freehand. Green for open space, parks, quilted with spirals. I love to sew spirals for their meditative possibilities and they function as symbols for the cycle of life and death, of spiritual life, of evolution, of rebirth and regeneration. And let’s face it: they also look like snails, which small kids are attracted to. (Bigger kids too.)

Today I’ll pack up the quilt to mail to E. in Ottawa. I hope he’ll recognize the bus from the song we sang last winter and spring and I hope he’ll trace the spirals with a single finger and know something of the deeply satisfying process of stitching them into 3 layers of cotton (because I used a soft organic cotton batting for the middle layer). And what he won’t know, but the quilt knows, is how as I sewed, I remembered his own father’s daily walk, with his brother and sister, down to the highway where a yellow bus would stop at our driveway to take them to school and how it would bring them home again. Nothing is wasted, nothing is lost, and sewing stitches everything together again.

As I was piecing together the dark path, the frozen sidewalk south of the river in Edmonton, I thought of the stone path to the outhouse; the trail to beaches I’ve loved in my sixty-four years, draped with snowberry, thimbleberry, black hawthorn, and ninebark; the trail through salal and Oregon grape, created as a shortcut for my children’s daily walk, accompanied by Lily, to where the school bus stopped for them on its way from Egmont to their schools, now overgrown.
–from “A Dark Path”, one of the essays in Blue Portugal, forthcoming April 2022 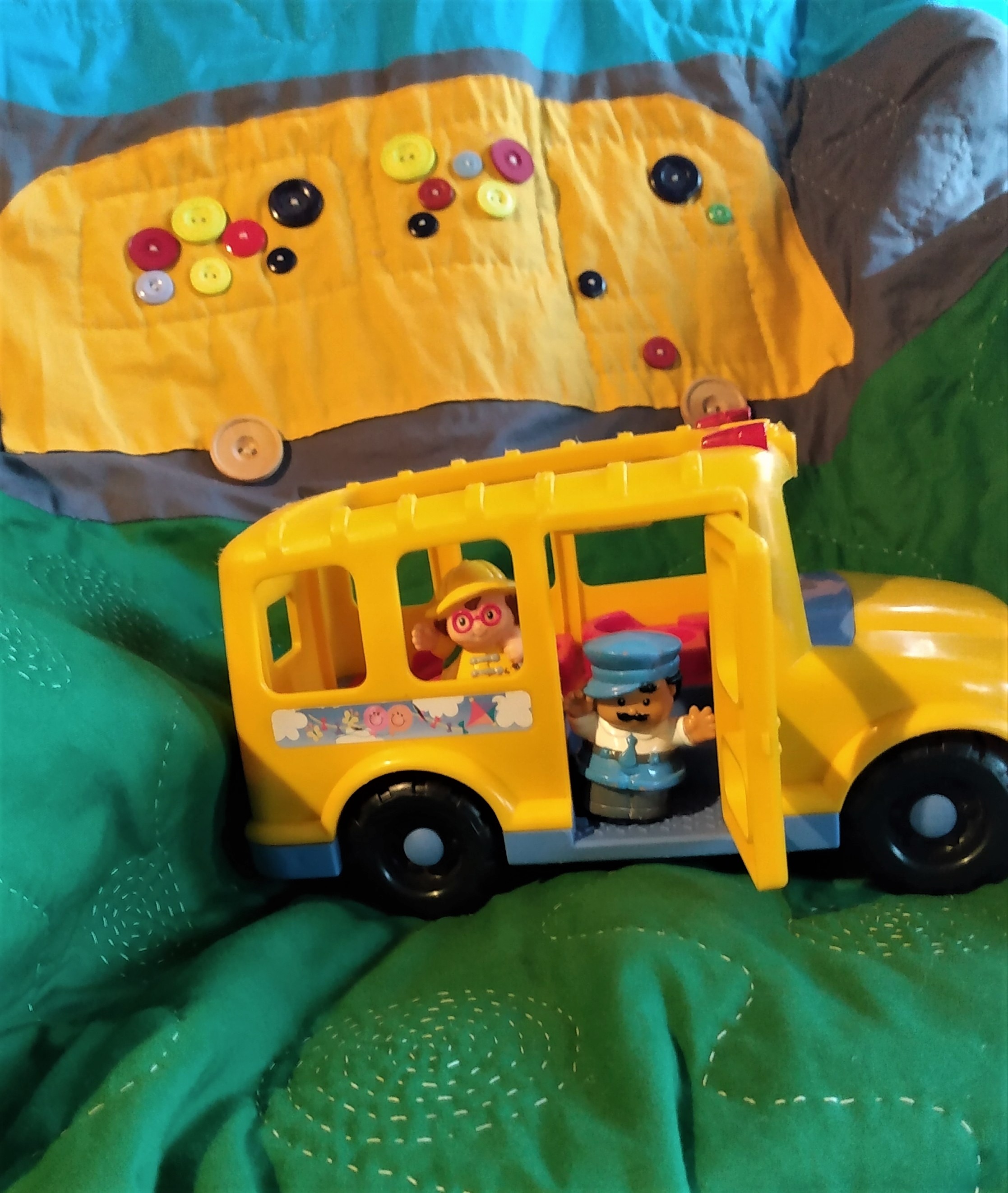 8 thoughts on “the wheels on the bus”