Down Vancouver Island this morning after a terrific reading event last evening in Nanaimo, Wordstorm, with a generous audience (and a delicious Goan prawn dish first at the host restaurant, the Tandoori Junction). I said, as we drove, that I always know when I’m on the Island (where I spent most of the first twenty five years of my life, apart from some years in Halifax, Matsqui, Greece, and Ireland) because my skin feels as though it’s come home. I know where I am by scent. By the air. And approaching Goldstream River, I knew the salmon were there. We stopped and in pouring rain I walked out to see them, the chum (or dog) salmon my father used to take us to see each autumn. The salmon I’m used to watching now are sockeye and coho, both more colourful when they spawn, so it took my eyes a few minutes to see the silver bodies in the grey water. But I could smell them, a fresh smell, water and fish and rain. There were a few dead ones 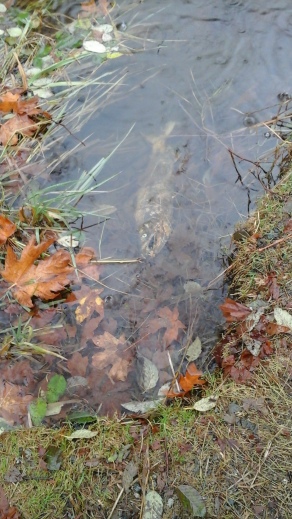 and gulls whirling above, a kingfisher rattling in a cedar, and walking back, I was surprised to see blossom:

I thought of Michelle Shocked’s song “Blackberry Blossom” and it seemed so right to be humming it as I returned to the car where John was listening to jazz:

Everything a piece, a part of my history, my memory, even stopping in to see the Mammoth exhibit at the Museum with Angelica and being reminded, among the mastadon jaws and the mammoth tusks and even Lyuba herself, 42,000 years old,

that one of my sons, aged about 4, used to say that he wanted to be Early Man when he grew up, having been entranced by drawings of hominini in my old anthropology textbooks, hairy people around campfires with mammoths lurking in the background. So time passes, rivers run, salmon spawn, boys grow up to be mathematicians rather than Australopithicus, and the breakwater at Ogden Point is now fenced for our safety. Still, the sealions pass in joy, a heron fishes from a clump of bull kelp, and the sea, oh the sea, is the same sea I loved as a child, the mountains of the Olympic Peninsula barely visible through cloud.

And now back at the Surf Motel where we stayed when one son (that son) was married to his sweetheart on Beacon Hill and where I walked on the breakwater very early on the morning of his wedding, remembering everything.

Early man, wish you were here.