This is a little fragment (courtesy of Google translate, as I was unable to find the lyrics in English) of the fadista Joana Amendoeira’s song, “Fado dos Azulejos”. Fado and azulejos are what I think of when I remember Lisbon. We spent a week there, with several more weeks in other parts of Portugal, the winter before last. We had a little apartment in the Alfama and this was the view from one window:

We’d come to Lisbon from Evora and in Evora we’d entered churches through dark wooden doors to find rooms of light. The azulejos — the word means “tiles” but the azulejos are more an element of culture, a way of interpreting space, of extending it and notating it — became the way we saw interiors in Portugal. In churches and palaces, azulejos were used the way tapestries and other elaborate textiles decorate such places in other countries. Even the altars are covered with azulejos rather than linen finely embroidered with gold. They have a long history, arriving in Portugal 5 centuries ago as part of the Arab presence on the Iberian peninsula. They seem to have come from Seville, though I suspect there are as many opinions on this as there are styles of azulejos. The word sounds like its root is “blue”, doesn’t it? But it’s not. It’s from the Arabic, “al zulaycha” or “zellige”, meaning little polished stone. A means of making pattern, like mosaics of marble. I read somewhere that they represent a rejection of emptiness and those spaces  with their vaulted ceilings — the churches in Faro and Evora and Lisbon and Sintra — are anything but empty. You could see how the artistic tradition developed as you moved from a 16th c. church to a late 17th c. one, particularly if the work was done by Antonio de Oliveira Bernardes or his son Policarpo; the figures in their azulejos are so shapely and multi-dimensional, the perspective sophisticated and the faces beautifully detailed.

And the blue and white azulejos were sort of late to the game, in any case, becoming popular in the 17th century with the arrival of Delft tiles — and those influenced by Chinese porcelains and Indian chintzs. I loved the practicality of azulejos, the way they moderate temperature, reflecting heat in summer and humidity in winter. Our apartment had a series of clothes lines running horizontally just below the window facing the azulejos; hanging out a load of our well-travelled laundry, I was surprised at how quickly it dried in reflected sunlight.

Yesterday we saw a film in Gibsons as part of the Sunshine Coast Art Crawl, Montrealer Luid de Moura Sobral’s Azulejos: Une Utopie Ceramique. It was fascinating and made me wistful for a place shaped in such a way. Where walking, you pass a window with the light glancing off a tile:

Or you pause on a stone wall and notice how the lower part of the wall is faced with azulejos:

It was too dark in the Heritage Playhouse in Gibsons to make notes while I watched the film but I did try to scrawl something in my notebook because it surprised me, coming as it did after a series of images of spaces defined by azulejos: the Lisbon underground, benches in Montreal, churches in Evora, a monastery in Brazil. I don’t remember the first part of the sentence but what I scribbled was: “utopia never properly theorized.” I remembered the doors opening and closing on those rooms of light, the stacks of painted and glazed plates on the lane out our hotel window in Evora (dinner plates I regret not buying though I did stash two small ones in my suitcase, wrapped in an unnecessary warm sweater), and the windows of antique stores with tiles from the 16th, 17th, and 18th centuries, regal in their isolation, and I wondered what theory could possible hold such beauty? 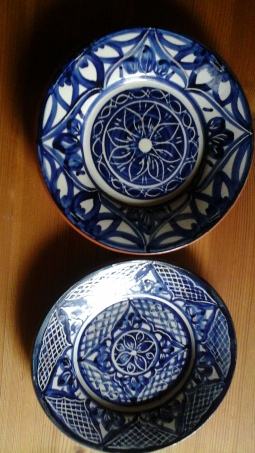