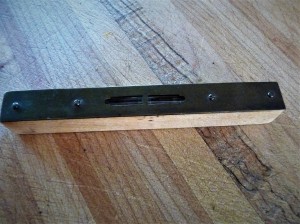 This is a spirit level on a cutting board of spalted maple on a maple worktable on a tile floor in the kitchen of the house we built more than 35 years ago. It sounds like a children’s rhyme, doesn’t it? A hole in the bucket, the spider that caught the fly, the small tool that measures level. This particular level was made by John’s grandfather and included in a tool box his grandfather Harold Pass gave his own son Ben to take to Canada when John’s family emigrated from England in the early 1950s. It seems to me to be a level more useful for cabinet-making than house-building and in fact Harold Pass was a cabinet-maker. The level is oak, with a brass plate fastened on with four smalls screws and if you look in the little window, you can see that our board (and our worktable and our floor and our house) is/are level.

But what about the spirit? Mine feels erratic these days. How can it not? If I listen to the news, my heart starts to race. Wildfires across the province, men without souls meeting to discuss the fate of the world we have known and loved, and even closer to home, the man who cleans up the small park where we swim most mornings expressing dismay at how young men came to the park on the weekend, took over the beach, moving the picnic tables into the lake, and drunkenly challenging anyone who tried to move them back. A beach where children swim and families bring picnics.

When we swim, we are almost always the only ones there. Yesterday a trout jumped out of the water in a shady area near a log. The other day a family of loons came quite close to shore and tried their voices, the song crazy and beautiful. This morning as I swam, I saw, at eye-level, small flies—may flies?—skittering in a regular pattern across the lake’s surface and I suddenly realized the connection between the pattern a fly-fisher creates on the water and the habits of the insects they are mimicking. How many times have I stroked through the water and never noticed the flies? I see mosquitoes and swallows dipping low to feed on them. I see wasps hovering. Occasionally a snake swimming strongly, head alert. But I’d never noticed the dance of the morning flies.

Right now John is outside, finishing the small deck and stairs off the entrance to our printshop. He’s been working on the deck for a week or so, replacing the older (and smaller) deck that was beginning to sag. I saw him pick up a big red plastic spirit level to check to make sure everything was right. These are the steps that lead to the deck that John built. The door that opens to the printshop where two presses wait to print the poem that John wrote for Edmond’s birth. (On our fridge, the poems for Kelly, Arthur, and Henry.)

I want my own spirit to settle down, to pay attention to the details of the place I care for in a general way but also specific ways. Listening to the last Swainson’s thrush songs of the year (probably) this morning. I saw one very early, darting out to eat mountain ash berries. Mostly they are flute notes in the woods to the south of the house so I was surprised to see the actual bird.

‘On you go now! Run, son, like the devil
And tell your mother to try
To find me a new bubble for the spirit level
And a new knot for this tie.’

That’s Seamus Heaney, making a riddle of the name for the tool that measures level but also takes our measure.  When I looked online just now to see what the liquid is that makes the bubble to indicate level, a tool site told me this: “A Spirit Level is a tool used to indicate how parallel (level) or perpendicular (plumb) a surface is relative to the earth. A spirit level gets its name from the mineral spirit solution inside the levels.” Oh the world is coded today, the last song of the thrush, the bubble hovering in the small implement on my kitchen worktable, the messages in the old rhymes we learn as children and don’t forget. I know an old lady who swallowed a fly. There’s a hole in the bucket. A little bird told me. The wise old owl saw on an oak and the more he saw, the less he spoke.

I woke at 4 this morning and was lying in the near-light, the silence, when quite promptly at 4:20, the dawn chorus began. Not as loud and fulsome as May mornings but still lovely — the Swainson’s Thrushes, the robins, others I can’t distinguish in the complex braid of whistles. They’re almost liquid, like water, those notes falling from the air.

Yesterday it was very hot here and it seemed the mother robin was off her nest more often than on it. John expressed doubt that there was any life inside it, given the heat and the absences. This morning is cooler and when I saw the bird glide away from the nest, through the fringe of wisteria leaves, I quickly brought the camera and this is what it saw. It, not me, because I didn’t want to disturb the nest or the bird for longer than the five seconds it took to hold the camera up over the nest and click.

Just think — in less than two weeks, if we’re lucky, we’ll watch these offspring glide from the nest themselves, out into the wild blue yonder. (I just typed “wonder”. That too.)