One of my Christmas gifts this year, from my husband John: the extraordinary recording The Trackless Woods, in which Iris DeMent has set poems by Anna Akhmatova and accompanies herself so sweetly on piano with some help from Leo Kottke. I’ve loved Akhmatova since I first read her poems when I was in my early twenties. And who knew they would hold up so well in these country gospel settings? There is something so quietly profound about DeMent’s voice — I have her earlier cd, My Life (1993) but I couldn’t have anticipated this pairing. I’ve just read Rosemary Sullivan’s Stalin’s Daughter and have some fresh insights into the horrors of the terrible years of Soviet power and somehow these poems bring it so sorrowfully to life:

I drink to this house, already destroyed,

And my whole life, too awful to tell,

To the loneliness we together enjoyed,

I drink to you as well,

To the eyes with deadly cold imbued,

To the lips that betrayed me with a lie,

To the world for being cruel and rude,

I’m listening to this as the house whirls in its holiday colour and spirit, while food is being prepared, drinks poured, and on the table, a little sprig of winter jasmine as the year comes to an end. 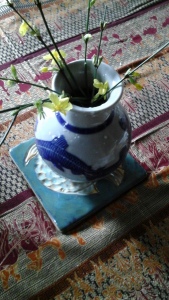 I don’t watch much television so after dinner, when the kitchen is tidied and food put away, I head upstairs to read. I love to get into my bed, arrange four pillows comfortably behind me, and find my way into a novel. Or poetry. Or (as was the case the night before last) a recent Harper’s Magazine panel discussion on the Israeli-Palestinian conflict. There are windows on four sides of my bedroom and I can hear whatever is going on outside — boats down on Sakinaw Lake, teens on the highway laying rubber in the most extraordinary scribbles (this is surely a form of graffiti?), owls, loons, sometimes coyotes singing solo or in beautiful intricate harmonies. I’ve done this all the years we’ve lived in this house — we officially moved in on December 18th, 1982 but had been spending most of our time camping and then building (and sleeping on the floor of what’s now the dining area) for 18 months previous to that. I know that I don’t often have original thoughts and with my reading lately, I realize that I am repeating old habits. For some reason, I’ve been pulling old books off the shelf and taking them up to my bed. Yesterday it was Anna Akhmatova’s Poems, translated by Lyn Coffin. I have other translations — D.M. Thomas, Judith Hemschemeyer — but this collection is one I read 23 years ago when I was coming back to writing after an absence, one filled with babies and play-school and herding little children up and down the driveway to and from the school bus.

When I re-read “On the Road” last night, I was transported back to those years. It’s a poem that entered my body, my heart, and found a place in my own pulse. “This land isn’t native to me…” it begins. And how often I’ve felt that. As a young woman I travelled, mostly alone, through Europe, lived for a time in London, then on an island off the west coast of Ireland, trying to figure out how to be a writer. I wanted something. I wasn’t sure what it was. I’d burned bridges in the city where I’d grown up and wasn’t sure I could ever return. (I did, briefly.) I had such yearning, a girl’s yearning, and I’d try to imagine myself into the future. Would anyone ever love me? Would I find a place to make a home? In retrospect, these questions seem so melodramatic and silly but they were so real at the time. I remember staying with some new friends in the south of France just after my 21st birthday and wanting so badly to live among them, maybe in the grove where we ate lunch with a tribe of actors who’d restored an old stone house and made their own wine and brandy (an orange suspended on a wire in one vat). Or maybe in the caravan in the corner of a farmer’s field in Turlough, Co. Mayo, where an elderly friend cared for stray animals (me included) and shared her extraordinary memories day after day over pots of strong tea.

In my bed at night, I keep track of sunsets and they’re earlier now, redder (because of the haze of forest fires burning in the Interior, I think), and my white linen curtains turn pink for a moment as the sun tumbles down behind Texada Island. Last night, the lines of poetry were exactly true, as they were when I first read them and was preparing a manuscript of poems (which became Black Cup):

And the sunset itself in waves of ether

Is such that I can’t say with certainty

Whether the day is ending, or the world, or whether

The secret of secrets is again in me.

It’s been a summer of short trips — to Ottawa, the Okanagan, Edmonton (to meet my beautiful grand-daughter Kelly) — and house-guests and I’ve enjoyed every bit of it. The garden has flourished, still flourishes, and I’ve been making preserves, curing garlic, shallots, and squash:

And I have writing to return to. For some reason I haven’t been able to work this summer, though the stack of quilt blocks on the trunk at the foot of my bed keeps me thinking about “Euclid’s Orchard” — both the essay about math and family history and horticulture as well as the actual quilt whose conception and making has been a companion to the writing. This morning I tried a pattern on my bed, tried to find a pleasing arrangement of the blocks. I’m not sure whether to arrange them in the order I made them or in an order that makes sense mathematically or in an order that resembles poetry and not science. (I’m leaning in that direction…) They’re a bit bigger than book pages and will be sashed with deep blue Moravian blue-print which I bought a few years ago in Roznov. (The quilt under them is a log-cabin I made for my parents’ 50th anniversary.) 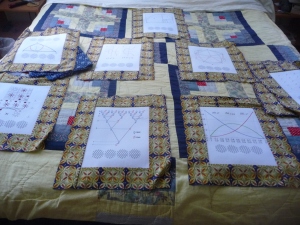 But last night — and this morning — I feel as though the secret of secrets is again in me. And I’m ready.