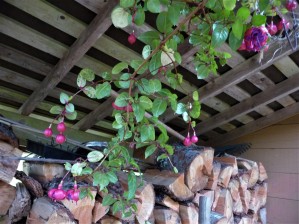 I was outside sweeping the deck so John could safely walk back and forth with his walker when I looked up to see the basket of fuchsia blooming so wildly, as though it hadn’t snowed this morning. I took the basket around to the woodshed and hung it under cover until I can figure out where to put it for the winter. My sunroom is filled to the brim with plants, the hooks supporting four baskets of epiphyllums. (The other morning when I was bringing up John’s breakfast and straightening the bed, he said, What can I ever do to thank you for these days? And I said one word: greenhouse….Done, he replied. So that will be a late winter project.)

Anyway, the fuchsias. I love to watch the hummingbirds deep in their throats all summer, love to water them on hot mornings and see tree frogs leaping from the basket. But today I was taken back, back, back to the west of Ireland and the walk from Eyrephort strand up to the Sky Road.  They were F. magellanica, the perennial or hedging fuchsias, and part of the road was a tunnel of them, right below the house where Peter O’Toole lived. When I came in from sweeping, I opened my book Mnemonic: A Book of Trees to read the passage about that road again, taken back again in the reading more than 40 years (because Mnemonic was published in 2011 so I have to adjust the time in my mind):

A section of Irish hedgerow

I’d cross over from Inishturbot by curragh to Eyrephort Strand and then walk up to the Sky Road where I might get a ride to Clifden if I was lucky. If not, I walked the eleven kilometres. Sometimes I borrowed a bike from the farmer whose cows grazed in the fields that ended at the sea. Either way, the road that led up to the Sky Road was narrow, a leafy tunnel through fuchsia, hawthorn, branches of black sloes hanging heavy from their stems, brambles, and gorse blooming in almost every month. I never knew all the birds that sang, or didn’t, in the dense lattice of twigs and greenery but sometimes I’d see a nest with a blue tit hovering, or I’d hear the flute notes of a blackbird. Spiders, butterflies, bees humming in the primroses of early summer, and once I glimpsed a badger emerging from a gap where the hedge met a stone wall. Cattle beyond the hedgerow grazed in sour fields while soft rain slicked their hides.

There weren’t many large trees. Plantings of pines and yew near the farmyard of the bachelor who gave me rides a few times and was handsome as sin but also rumoured to be dangerous. A few alders in the damp area where a seasonal stream came off the hills, the stunted willows by my bedroom window. I missed the dense forests of my native British Columbia raincoast during that year, though now I sometimes dream of walking up through that tunnel, fresh in spring or dust-worn in August, listening for birds, plucking a stem of fuchsia to tuck into my hat. Thirty-five years have passed, and still I remember white campion, dead-nettle, meadowsweet, and bryony lacing up into the sallies, and how I once dug up a small primrose to take back to my cottage where it bloomed in a blue teacup on the windowsill.