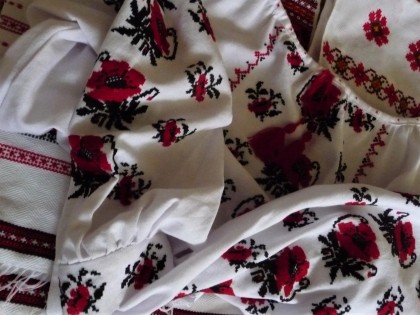 I meant to plant the garlic earlier. It’s usually in the ground and mulched with maple leaves by this point in the fall. But this year? Time raced, as it sometimes does, and I held on for dear life as we prepared for John’s surgery in October, clearing paths through the house so he would be able to use a walker from one room to the next. Instead of digging over the garlic bed, I was reading about wound care, making sure we had everything we needed for the months to come. But the other day there was a clear space in the day and I dug the bed. I went out in the rain an hour ago to dig the furrows and plant the cloves of Metechi (my favourite, originally from the Republic of Georgia or maybe Kazakhstan, though ours came from a farmers’ market in Lytton about 5 years ago), Music (from Peter Haas), and Red Russian, strewing the furrows first with kelp meal and bone meal, and tucking the cloves in with fish compost from Salish Soils.  Is it too late? I don’t think so. The fall has been quite mild, though on Monday when I drove out for a swim, there was a dusting of new snow on the mountain and few delicate flakes falling from the sky at the top of the Sakinaw hill.

Yesterday we went to Sechelt for a medical appointment and physiotherapy for John. While I was waiting for him, my hands were exploring the texture of the poppies on my shirt, a vyshyvanka I bought in Kosiv, in Western Ukraine, last fall. This embroidery is hand-done. I bought two shirts on that trip, one with geometric embroidery (machine-done), and this one, with brilliant red poppies strewn across the chest and sleeves. As my fingers traced the shape of one flower, I felt a jolt, a small electric volta, like the moment in the sonnet when everything shifts, when the argument or thesis presented in the first part resolves itself in the second. It is the hinge, the fulcrum. Could the shirt with poppies be my own fulcrum?

I’ve begun a new extended piece of writing, fiction (I think), and I’ve been wondering about how to move between what I know and what I need to find out. I need a device, a strand to follow, to allow me to make sense of material, some of which is historical, some contemporary. (I think of the time brackets, or volta brackets, in music, when a passage is played two or more times, but with different endings.) I need a strand, a length of red embroidery thread to lead me into the early 20th century in Western Ukraine and back again. In my trunk of textiles, I have 4 lengths of rushnyk, the ritual cloths you see in Orthodox churches, wrapped around bread, given at weddings; they are coded, richly symbolic. When distant relatives came to our Carpathian hotel last fall to meet me, they brought champagne and a beautiful rushnyk, chocolate and photographs. Is it too late to learn how to read these cloths, how to run my hands along the borders of stars and berries, sheaves of wheat? One source implies the cloths can be a link between the living and the dead, those who stayed and those who left. Is it too late?

2 thoughts on “quotidian lines: is it too late?”