The other day we walked up to the area where we’ve picked blackberries for decades. It’s a little higher and the berries were good but they’ll be even better later this week. We picked two buckets and agreed we’d return. Last night we were coming back from supper at the Backeddy Pub and we stopped at The Cove in Earls Cove for ice-cream. A moment of sadness when I saw that the old Earl House has been torn down. It was derelict, I guess, but I remember when people lived there, when woodsmoke bloomed from its chimney, when it held its stories of the place as surely as a book does. For one summer, a woman ran a little antique shop in its lower rooms and she created the prettiest garden at the entrance. 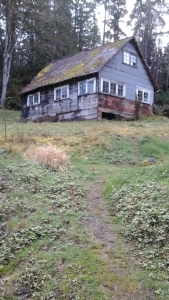 In The Cove, two men were talking about the fire at Sakinaw Lake. They’d seen the smoke on their drive to the ferry and they’d called in the fire. I leaned in to their conversation and asked them where the fire was exactly. They showed me on a a map on a phone. Very near here. So we drove past our place on our way home and tried to find the location. You could see the smoke and you could smell it and you could hear a helicopter coming and going. I didn’t see a bucket dangling for water but there are dense forests on either side of the highway and the visibility wasn’t great.

All night I kept waking to smell the smoke. The B.C. Wildfire site indicates it’s a very small fire: 2 ha. And the helicopter is at work this morning. If you look on this map, you’ll see the fire’s location and it’s almost exactly where we pick berries.

The other day we saw the paths that bears made into the patch and there was fresh elk scat everywhere. The fire is near the big substation connected to the Cheekeye-Dunsmuir line so I expect it will be out soon, if not already (though the smell of smoke is strong).

What is it about woodsmoke? In winter, I love to smell the first cedar-infused whiff of it as John makes the fire in the woodstove. In Earls Cove, it meant someone was living in the old house. It meant warmth and comfort: residency. But in the night? Low-grade fear. The woods aren’t as dry as they were a few weeks ago, before the rains that filled the creeks and flattened the garden.

Selfishly, I wonder about the blackberries and how long they too remember smoke.