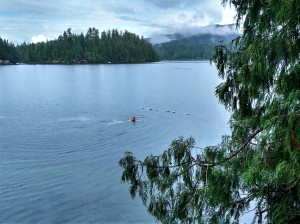 You wake, heart-sick because of a mass shooting, inspired by the ugly discourse (if one can dignify it with the term) of the far-right government to the south of your own country, and then you read that there was another shooting, more innocent people gunned down, also inspired by the awful president and his casual hateful language.

You try to gather what’s good. Deadhead the roses, geraniums.  You listen to Hilary Hahn playing The Lark Ascending over and over again. One son sends a photograph of your beloved grandson eating raspberries and ice-cream in a big bowl. Your daughter talks of a swim with your other son and his family. When they were here last week, you’d wake in the night and come quietly downstairs to work at your desk, the darkness huge around you.

Night is a cistern. Owls sing. Refugees tread meadow roads
with the loud rustling of endless grief.
Who are you, walking in this worried crowd.

One day your grandchildren were playing in your study and they ran out, screaming, There are ghosts in there! It was part of a game (you think), but yes, there are. (You didn’t tell them this.) Right this minute, you remember how your long-dead family—parents, grandparents, and as far back as you could go—stood behind you as you tried to write their story, in the night (again), when you thought you might have a fatal illness. Well, it didn’t occur to you that you might have that particular condition until a doctor pointed out evidence on a screen in a big hospital, taking you deep into your own lungs, and talking about margins, metastases, biopsies, and you said to him, I never knew my lungs were so beautiful. They’re like contour maps! (He was taken aback, but only for a moment.)

In the night, the ghosts still gather. They are people still living (you feel your granddaughter’s hand on your arm, wanting the glitter paints, the tiny wooden bead with the second “l” in her name), they are the children you gave birth to and loved so fiercely that you can’t believe they weren’t wounded by your love (and maybe they were, are, but they still come back to this house and your table, they still tell you they love you), they are the young couple in their celebratory clothes (your white gauze dress, his Harris tweed jacket and impossibly wide-legged corduroy trousers) standing in front of a fireplace, just married. They are your own parents, whose 69th wedding anniversary it would have been, is, today.

Night is a cistern. The last pairs dance at a country ball.

Last night, awake, thinking about how a city mourns its dead, you heard an owl calling quite near to your window. When you got up and went for your swim, the sand at the lake was dense with deer prints and you thought of them coming to drink cool water at dawn, unaware that the world was filled with madmen who shoot children in their mother’s arms, goaded to the action by another madman.

An unknown hand draws the dawn’s first stroke.
Lamps fade, a motor chokes.
Before us, life’s path, and instants of astronomy.

But what do the stars tell us of the violence of men and what they’ll do for their moment of immortality? The stars are indifferent to us. And that might be our salvation.

*The passages of poetry are from “Night is a Cistern”, by Adam Zagajewski, translated by Clare Cavanagh.