A year ago, I was planning a long essay about rivers, inspired by Oliver Sacks. I finished it and am in the process of finding a home for it. As I’m also trying to find a home for my novella about rivers, also completed in the past year. More water, more searching, more finishing… 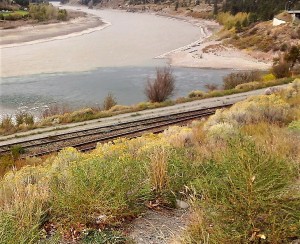 “Eventually, all things merge into one, and a river runs through it. The river was cut by the world’s great flood and runs over rocks from the basement of time. On some of the rocks are timeless raindrops. Under the rocks are the words, and some of the words are theirs.

I am haunted by waters.” — Norman Maclean, from A River Runs Through It

Last night I finished reading The River of Consciousness, the final collection of essays by Oliver Sacks. It’s a beautiful book, full of lively, erudite, and humane explorations of memory, illness, and yes, consciousness. I put it on my bedside table, turned out the light, fell into a deep sleep (helped a little, I have to say, by my homemade tincture), and woke with one thought in my mind. Do rivers themselves have consciousness?

I suspect they do. Think of how often we use river terms for our own metaphorical purposes. River of consciousness. Stream of consciousness (that wonderful narrative device so beloved by the Modernists). Time and the river.

If a dynamic, flowing consciousness allows, at the lowest level, a continuous active scanning or looking, at a higher level it allows the interaction of perception of memory, of present and past. — Oliver Sacks

The photograph above is the moment of the Thompson River entering the larger body of the Fraser River, at Lytton. How long before the Thompson is just a memory of green water in the darker water of the Fraser? What does it retain of its essential self? Its origins, its sediments, its particular history, its…yes, its own fluid memory?

My husband’s new book of poetry is due out from Harbour Publishing later this year. Its title? This Was The River. I’m thinking a conversation about rivers and their own consciousness might well begin this evening, by our fire, over a glass of wine. And later this winter or early spring, overlooking the Thompson and the Fraser, a place we stop every time we drive up Highway 1 into the Interior.

I made some notes this morning and I hope to enter the river of consciousness as well as its obverse during these dark days of January. Maybe most particularly its obverse.