We walked along the dirt roads tracing the old paths of the Ukrainian settlers in Alberta,courtesy of the Ukrainian Village Museum east of Edmonton. My paternal grandfather was one of these and I hoped to find a way to understand the world he entered when he arrived in Alberta sometime after 1909. And in a way I did. The soft grass, the wild roses, the cool interior of this house where a man from Bukovina described building techniques, lifeways. 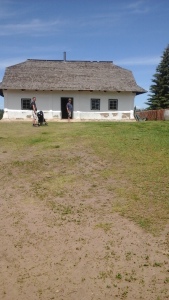 And strangely the house looks so much like those I’ve seen in William Kurelek’s book about his father’s village in Bukovina,  not far from my grandfather’s village. So we walked, Brendan, John, Kelly, and I, and I thought how near everything was, and how we are knitted to the past by strands of grass, the long leaves of willow, the sad eyes of the saints in the Orthodox church. 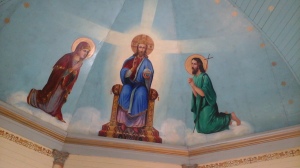