I’ve been working hard on a new extended essay and part of it is about genetics. Not in a scientific way — I barely passed Biology 12 — but more as a meditation on what we inherit and what we don’t. I’ve been growing peas I first obtained in the Mendel Museum giftshop in Brno in the winter of 2012 and keeping (very casual) notes on their progress. I’ve saved the seed each year since 2012. In 2012, 2013, and 2014, the seeds were smooth and yellow and produced vines with white flowers. Last fall, because I was busy, I simply dried some peas in their pods and saved them in an envelope, unshelled. When I opened them a few weeks ago to plant them, I was amazed to see what the 2014 peas produced as seed: 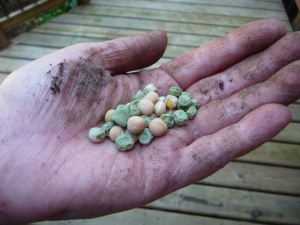 I grow another variety, Mammoth Melting Sugar, in the garden too and so I guess the bees have done their work. But the thing is, the Mammoth pea seeds are also smooth and yellow.

As I eagerly wait for each new photograph of my grand-daughter, and also anticipate the birth of her cousin in the fall, this extended project of saving seed and watching a cultivar gradually change and adapt over the years becomes all the more intriguing. So much can be predicted and so much is mysterious.

3 thoughts on “hybridity in the green world”