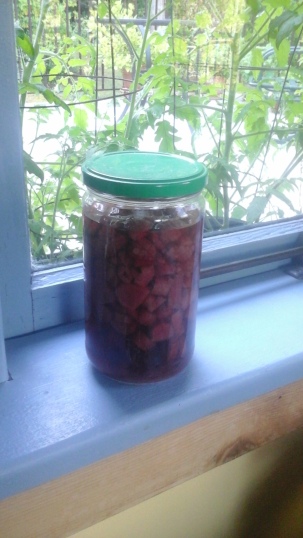 From “Ballast”, a work-in-progress:

In the thatched house at the Ukrainian Cultural Village Museum near Edmonton, some rough linens, lengths of bright woven cloth on the benches of the good room where guests would be brought, where a wedding was celebrated by 70 guests eating and dancing, the “owner” told us, a man from Bukovina whose daughter-in-law worked in the fenced garden. There were potatoes, beets, feathery fronds of dill everywhere, self-sown, a hardy variety: did it travel with the family from Bukovina, a twist of paper containing its seeds, its beloved flavour, the flavour of home? Along with Black Krim tomatoes, Koda cabbages (from Polish relations), the Viktoria Ukrainskaya peas? Seeds traded with Mennonites for their own hoarded heritage, with Sudeten Germans and Croatians and Armenians for cucumbers, along with Lyaliuks from Belarus. We ate cabbage rolls and cucumber salad green with dill at the snack bar and I tasted my way back to the long table set up in the backyard of my aunt and uncle where my father’s family gathered every time we visited Edmonton, the woman in the kitchen all morning rolling dough and filling pedeha with soft mashed potato and cheese curd and sliced green onions so strong my eyes watered. Slices of hard sausage dark with caraway, and rolls with hard crusts. My uncles held a fist of bread and a glass full of something clear which they drank down, grimaced, then laughed. We had our own drink, raspberry juice with a whiff of vinegar, compot it was called, and was poured from the quart jars, murky with floating fruit, we were asked to bring from a certain shelf in the cellar where spiderwebs draped the windows. Sometimes we pretended to be the uncles, drinking deeply and dancing with our glasses raised high, laughing and slurring our speech. We didn’t know what sorrows they carried in their pockets, hidden away at times like those, but tolerated by their wives who cooked and wiped at red faces with a tea-towel damp with steam.