We walked over to the creek to see if the coho were there yet. Some years it’s a little earlier and some years later. We’ve seen them as late as New Year’s Day and as early as the beginning of December. Today, though? I think we were seeing the beginning of the run. There weren’t yet fish in the upper pools and there were lots just entering the creek from Sakinaw Lake where they’d been gathering until water levels were high enough in the creek. This couple was the first we saw: 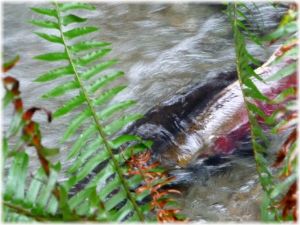 And this beauty waiting for an opportunity to make the leap up a small ladder:

We’ve lived here since 1982 and it never gets old. The fish crowding into the pools, pairing up, the dippers on the logs, the mergansers waiting at the creek mouth for stray eggs to wash down, the eagles in the cedars, the lake beyond leading to the ocean, the young couple we were ourselves when we first walked here with our children, our deep pleasure at the returning coho.

One year I accompanied Angelica and her friend Gloria to this creek and two others when they were 15 and conducting an aquatic insect sampling for a science project. They wore hip-waders and dipped nets into the cold water — after the salmon had spawned, and taking care to avoid the area where the redds were —  making an inventory of what they found. I felt privileged to be part of their work, helping them to identify various larvae. And when I walk down to the creek each winter, I am aware of them, their voices calling out in excitement as they examined leeches and caddis fly larvae.

This morning the lake was quiet and the only sound was an eagle beyond the point and the splashing of fish as they angled for position in the gravel beds. 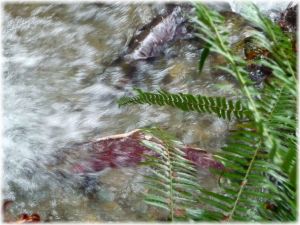 There’s a beautiful Tsimshian potlatch song that I think of when I watch the fish at the end of a long journey, a journey that ends in both death and life. These are the final three lines:

I walk around where the water runs into whirlpools.
They talk quickly as if they are in a hurry.
The sky is turning over. They call me.

And every year, they do.

I finished sewing binding on the salmon quilt yesterday and have packaged it up to put in the mail for Forrest and Manon in Ottawa. I am so pleased with how it turned out, though the sewing is clumsy and the squares slightly lopsided. Perfection has never been my goal. I want them to think of this place when they shake it out, lay it on their bed; I hope they will remember the boat trip down Sakinaw Lake to the little bay at the end, where the salmon were congregating before swimming through the fishways and finding their natal streams.

I think of this ancient Tsimshian song, sung before the distribution of gifts at a potlatch:

I will sing the song of the sky.

This is the song of the tired —

the salmon panting as they swim up the swift current.

I walk around where the water runs into whirlpools.

They talk quickly, as if they are in a hurry.

The sky is turning over. They call me.