The other afternoon, as we were driving on Highway 10X from Rosedale to Wayne, Alberta, anticipating lunch at the Last Chance Saloon, where we stayed (memorably) in April, 2016, I was commenting on the hills on either side of the Rosebud River, the striations so beautiful in sunlight, and my husband (a poet) recited two lines of Stanley Kunitz:

I aspire to the layers. I aspire to finding out where I fit in the silt and rock and dry paper records of land purchase and settlement, in the names on the 1926 census where I found my father’s parents (before his birth a few months later) on Midland Road, Michichi (which I first thought must mean the small village of Michichi but then realized was Michichi Creek, in Drumheller on the north side of the Red Deer River). In the mud along the river where I walked yesterday morning, finding other footprints made before my own, on the dry wide main street on Drumheller where I explored with two of my grandchildren yesterday and the day before. I felt porous in that landscape, every bit of light and scent of sage and mineral tang of water entering my body. In the cemetery where we went to pay respects to the two babies who would have been my aunts (Julia and Myrtle), my grandson Henry, age 2, told his mum that he loved his grandparents. You should tell them, she said, and he turned to me, said, I love my grandparents. He is the age Julia was when she died. He is as alive as any child I’ve ever known. When I showed him the bear skin on the ceiling of the Last Chance Saloon, just above our table as we ate grilled cheese sandwiches and hamburgers, he said delightedly, A star bear! A star bear! (It was, in a way — its skin spreadeagled against the low ceiling…)

Yes, I felt porous, the generations coming to rest in my cheekbones, the small ache in my knees as I unfolded myself from the seat of the rental car in front of the renovated miners cottage where we stayed just a block from the river, its kitchen lit by Benjamin nonexplosive lamps that might once have lit the entrance to a shaft, maybe even the shaft of a coalmine where my grandfather earned a small living for his 10 dependents on a farm near Michichi Creek. My granddaughter Kelly wanted the old story of the mermaid at bedtime, not the Disney version but the heartbreaking story written by Hans Christian Andersen in the book I bought for her in Edmonton and which we read over several days, her questions so sensible: Why does the mermaid have to give up her tail? It’s so beautiful. And her voice? Why couldn’t she keep half her voice?

Did the little girls buried in the Drumheller Cemetery love stories? Did anyone have time to read to them or hold them and sing, as we sang, the old songs, the ones John remembered, the ones I recalled? It was a hundred years ago that Myrtle died of diphtheria, 95 since Julia died of the same disease.I want nothing more right now than to live in the layers, folded into the place and the remnant lives of those who lived before me, lit by the soft light of those old lamps. 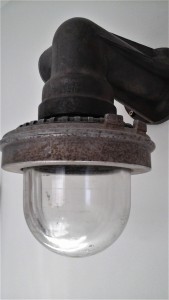