All morning the news was of the marches in cities across the world. A form of protest, a series of statements about justice and democracy, the moving sight of rivers of people holding signs, crossing bridges. A group of people on a research boat in Antarctica, holding up their signs. The hundreds of thousands in Grant Park, Chicago, a number considered too many for a march. Closer to me, just across Georgia Strait, in Nanaimo, a thousand. One for the history books, for certain

It’s interesting how we record history, the stories that are included, abandoned, neglected, overlooked, revised. I was talking to my older son this morning — well, talking to his family! His wife Manon and their son Arthur, who remembered his grandparents from his Christmas visit and who blew kisses cheerfully — about the stories remembered and handed down by Indigenous people in British Columbia. Forrest is teaching a survey course in B.C. history and I wondered if he knew a story recorded by Imbert Orchard in 1966, collected in Robert Budd’s Voices of British Columbia, in which Lizette Hall, a member of the Dakelh First Nation, remembers an incident from 1828 involving James Douglas, working then as a Hudson’s Bay Company clerk at Fort St. James, and Lizette’s great-grandfather, Chief Kwah. It’s a story her family kept intact because of her great-grandfather’s involvement. She acknowledges that the story she tells has been “retold so many times, and a thing added here and a thing added there. Well, this is the true story of what, just what did happen.”

We sometimes think that because things weren’t written down, well, then they can’t be reliable. Good stories, maybe. But history? Lizette tells her story so emphatically and clearly that I have every faith that her version is “the true story”. And remember the “discovery” of Franklin’s ships in Nunavut, in a place where Inuit people had said they were located? An oral tradition held the story of the ships carefully and accurately but not many “experts” believed the validity of something not written down. I’ve read that the Inuit called the area on Queen Maud Gulf where the Erebus was found “the Ship Place”. (What would have happened if archaeologists paid attention to such names a hundred years ago? Had paid attention to generations who told essentially the same story?) Louie Kamookak is an Inuit historian and it’s fascinating to read about his expedition to visit areas remembered by his great-grandmother Humahuk:

Humahuk’s father took one item that he later made into an ice chisel (in later years she learned it had been a dinner or butter knife). As they were looking for more objects they noticed a man-made mound the length of a full-grown person. At the end of it was a stone with strange markings on it. Seeing this, her father became afraid and they made their way down to the shore.

Once at the shore they found more strange objects: wood and a metal chain going into the sea.

The world is an intricate collection of stories, if we learn how to hear them, read them, hold them in our hands and decode their own particular language. I keep two rocks on my desk, pieces of conglomerate dense with fossils from the Sooke Formation, a geologic formation on the west coast of Vancouver Island, dating from the Oligocene, about 20-25 million years ago. The stones are heavy enough to hold paper down, literal enough to contain their own pages of marine history. I can read a little of it, recognize the marine fossils of gastropods, pelecypods, and oysters in the stones: 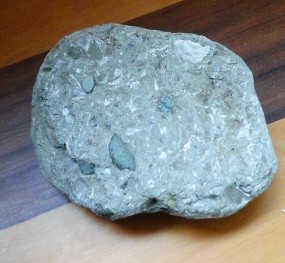 That tiny remnant of oyster on the top of the stone — it’s as beautiful as any pearl. And the other stone, with its ridge of bivalve — a clam? I run my thumb along its edge. 20 million years of calcite seamed into rock. 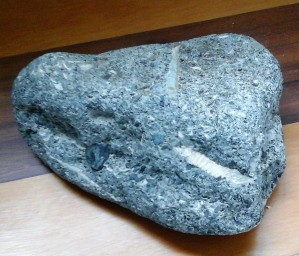 Instead of marching in Vancouver, we hiked the Cedar Bridge Trail. (We have to be in Vancouver twice next week, and it’s several hours each way, including a ferry…) Watery sunlight, pink buds on the alders, the sound of water running down the mountain (snow-melt!), the unsettling sight of a dead coyote in a creek by the highway, and as we came down off the trail, I had a sudden idea for a quilt. I’ve been working on one that somehow didn’t end up being as beautiful as I’d hoped. Strips of deep red, various dark blue plains and prints, and white damask from old tablecloths too worn for the table (but still with usable areas). Sashing of Japanese-inspired red and white prints. The backing is a big piece of Japanese cotton, indigo-dyed. It should be beautiful but instead it’s like a whole lot of French flags. I’ll finish it of course — I’m too thrifty not to. But I’ve been wondering about starting something that I’ll love as a process and as a finished quilt. I have two vintage linen sheets, found in a thrift store some years ago, and I thought today that instead of cutting them, I’ll batik salmon on one of them, making a whole life-cycle with varying sizes of fish, and even shell buttons for the eggs. Then I’ll dye the sheet using one of the shibori techniques I tried on smaller pieces of fabric last summer. This arashi, maybe, done with an old damask cloth.

Arashi means “storm” and if I can figure out how to do it with a large (single-bed sheet-sized) length of fabric, then I think it might be lovely. When I did this batch of indigo, I loved the process but wondered afterwards about the actual colour. I think this time I’ll use more indigo and do more immersions than I did last summer. I want a deeper blue. The fish will look something like this:

Now the snow has melted and I can be outside (if it’s not raining) with my dye vat and stick for stirring the tied lengths of fabric. I imagine them hanging on the clothesline to dry. It will be a story, told in dye and image, detailed in thread. Fish swirling and swimming, water rippling, shell buttons catching the light. A story open to interpretation.

Although you hide in the ebb and flow
Of the pale tide when the moon has set,
The people of coming days will know
About the casting out of my net,
And how you have leaped times out of mind
Over the little silver cords…
–from “The Fish”, by William Butler Yeats