So. Yesterday I finished writing the final essay for Blue Portugal. Or at least I finished a full draft, with some parts a little rougher than others. There are ten essays in this collection, ranging from meditations on colour, investigations into ampelography, entoptic phenomenon, Bach’s Violin Partita No. 2 in D minor as a soundtrack for navigating grief, the relationship between the venous system and rivers, and using Dante’s Inferno as a means to recover from fractures. I know. It doesn’t sound like a manuscript that will be easy to place with a publisher, does it? In truth, I don’t think the essays themselves are difficult or chilly. But they’re not issue-based. They’re not life-style pieces. I read those and enjoy many of them but they’re not what I write. Or at least they’re not what I need to write right now.

There’s a lot of blue in this collection. The title piece for example begins with wine, Modry Portugal, a beautiful light red wine we drank in the Czech Republic. Modry means blue in Czech (and other Slavic languages) and I wondered about the Portugal. Where did the grape come from, and how, and why. I also wanted to look more deeply at family origin stories. There’s another essay, “The Blue Etymologies”, that I wrote to puzzle through what I experienced when I fell last November and damaged my retinas.  I have walked behind the sky, wrote Derek Jarman in Chroma, and yes, that was exactly where I went. “blueprints” revisits housebuilding and various kinds of fabric resist printing and the cyanotypes of Anna Atkins. Several of the essays use maps and land surveys in an attempt to locate the past and a couple of them might be too personal to interest anyone but members of my family. Who can say. 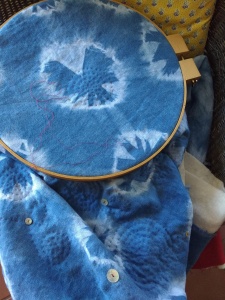 What I want to say is how much I’ve loved writing these essays. They are messy, imperfect, badly constructed in parts, and the craft is often careless; if you’ve read previous posts and seen images of the quilts I make, then you will recognize the parallel. But in an odd way they’ve kept me alive. Or they’ve kept my mind alive as I’ve navigated some health issues, have lain awake in the night thinking of my children and their children and how we’ve ended up living so far apart, have learned to do particular techniques with textiles, and have tried to keep what’s beautiful close to hand in the face of climate change, dangerous political systems, and an aging body.

The epigraph for this collection is a passage from a poem by the American poet Robert Penn Warren.

Tell me a story.

In this century, and moment, of mania,
Tell me a story.

Make it a story of great distances, and starlight.

The name of the story will be Time,
But you must not pronounce its name.

Tell me a story of deep delight.

Deep delight, in a moment of mania. That was me, in the night, writing by starlight, telling the story over and over again.