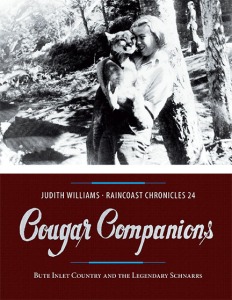 I was late coming to Cougar Companions: Bute Inlet Country and the Legendary Schnarrs, by Judith Williams, published as Raincoast Chronicles 24 by Harbour Publishing last spring. I knew about the Schnarrs, a homesteading family, with daughters who kept cougars as pets in the 1930s. And when we spent a day on Nelson Island in July, courtesy of our friend Howard White (who, with his wife Mary, founded Harbour Publishing in the last century), we talked about the book while sitting at Cape Cockburn, caught in one of those curves of time, the old cabin built by Harry Roberts behind us as we ate our lunch on the pebbled beach.

I remember saying how much I’d admired Two Wolves at the Dawn of Time, Judith Williams’s extraordinary documentation of Dzawada’enuxw artist Marianne Nicholson’s creation of a pictograph to acknowledge her village’s continuing strength at Kingcome Inlet as well as a meditation on the colonial legacy in the form of the Halliday homestead in the same area. I remember how we agreed that it was complicated to want to demonize all those homesteaders, one of whom had built the cabin we’d just explored. Complicated is the word I remember.

Friends came for dinner a few weeks ago and brought a bag of books as a gift. One of them was Cougar Companions. I’ve spent the last few nights enthralled, propped on 4 pillows, reading by the small light of my reading lamp.

On a winter day in 1934, August Schnarr, a handlogger, trapper, and homesteader, shot a cougar his dogs had treed on Sonora Island. When he began to skin it, he realized that it had recently given birth and had been nursing young. He found the den and brought home 4 tiny kits, their eyes not yet open, for his daughters to care for. He was a widower, charged with the responsibility of raising 3 young girls, aged 12, 10, and 7. Two of the kits died quite soon after but the other two, Leo and Cleo (soon to be called Girlie), grew to maturity. I was fascinated by the photographs of Pansy, Pearl, and Marion with their cougars. The cats only cared for them and could be menacing to others. With the girls, they were affectionate and reasonably biddable.

Judith Williams studies albums of photographs (August Schnarr was a avid photographer), store records, a journal kept by Pansy in 1934, and a miscellany of archival materials to piece together the lives of this family. But she does it not exactly as a historian. She is interested in how different “readings” of the material record and indeed the memories of those who knew the girls and their lives might result in different histories. “Conflicting stories can send me running in circles,” she admits. “Memory is not a science. A “reading” is not necessarily conventional history.” She also looks at, and for, the complicated (that word again) history of Bute Inlet, an 80 km. fjord with its origins at the head of the Homathko and Southgate Rivers, emptying into the ocean by Stuart Island. It’s a place Williams has explored by boat and she also wrote High Slack: Waddington’s Gold Road and the Bute Inlet Massacre of 1864, a book worth reading for its excellent balancing of oral and written histories of what became known as the Tsilhqot’in War.

The Schnarrs lived a hard life. The girls lost their mother the year before the cougar kits came and they did the work of men. They logged, they built and maintained boats, they set log rafts under their house so it could be moved up to their father’s Bute Inlet camp in summers, they preserved food for the coming year, smoking fish and meat, canning quarts and quarts of berries and other fruits, growing acres of vegetables, raising and killing pigs, and they tried to avoid the attentions of the old men who were always eager to pursue them. It seems Marion was not as lucky as the other girls and gave birth at least once in her adolescence.

This is book-as-memory-theatre. The backdrops, real and imagined, are constructed of old floathouses, dugout canoes, pictograph galleries in remote areas on the inlet, deep forests, abandoned camps. The soundtrack: wind, turbulent water, the keening of seabirds, a father’s voice shouting the orders his daughters knew they had to obey: “You jumped when he spoke and did it. You didn’t talk back. You’d get a backhander if you did. He had to be that way to survive. He was a gruff person.” Each daughter had a slightly different version of their lives.

What captured me most in the book are the photographs of the young girls with the cougars. The images were familiar somehow. The strength of the girls, the beauty of their companions. And yes, we’ve seen these pairings before. I think of some of the early images of Artemis, goddess of hunting, wild nature, young animals. The ravishing François Vase, a black-figure vessel dating from around 570 BCE, has several depictions of Artemis, one of her standing with a lioness and a stag. Look at her arms, her strength, 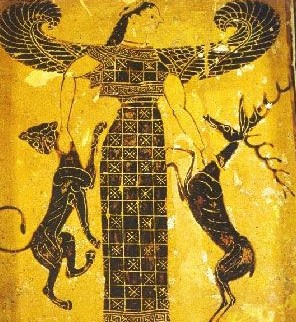 her steady gaze. There is something of this in the Schnarr sisters. 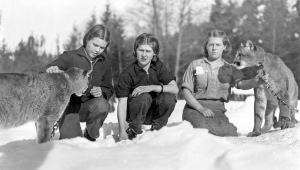 So yes, I was late coming to this book but I’ll never forget it. Last night I dreamed of a cougar on its chain and a fierce young woman guiding it. In the Homeric Hymn to Artemis, the rhapsode sings:

The tops of the high mountains tremble and the tangled wood echoes awesomely with the outcry of beasts: earth quakes and the sea also where fishes shoal.

It’s complicated, yes, but so important to how we continue to read and understand the multiple histories of this place.