Yesterday morning I was sitting at my desk when I heard a loud bang, a bird hitting the big window in the living room. I raced out with a tea towel.  Sometimes it’s too late, a broken neck or head injury. Sometimes there’s no bird at all but a tiny feather on the glass and maybe a bit of noise in a nearby tree as the lucky creature counts its blessings. But this time, there it was, a male red-breasted sapsucker on its back on the grass. I approached it quietly and gently wrapped it in the tea-towel, keeping its head upright. It was blinking. Have you ever seen a sapsucker’s eyelid? I’ve read that the eyelids aren’t used for blinking but this bird was blinking and I was close enough to see its eyelids. Its beak was open slightly. I was in my nightdress (it was still early) and I walked around outside, talking quietly to the sapsucker. He’d begun to look around a little and I could feel his heart against the palm of my hand. I’ve read that keeping the head upright to allow for neurological function is important (though other sources tell you to put the bird in a quiet dark place for two hours; I don’t do that). So we walked, the sapsucker and me, and I wondered aloud if it was one of the ones that we’ve seen year after year training their young to feed on the small cotoneaster just below the stairs on the way to the print shop. Maybe it was even this one, a fledgling from years ago, all grown up now with young of its own:

After about twenty minutes I placed the bird on a piece of wood holding down our pile of old cedar shakes kept for kindling. By now he was looking around and about two minutes after I stepped back from the pile, he flew up, just like that, and went to a big fir nearby, and began to feed.

I didn’t have a camera and can’t show the stunned sapsucker or his recovered self. So imagine him, prone on his back in the soft grass, then wrapped in a blue and white checked tea-towel. Imagine his delicate eyelids, his open beak, and then imagine him flying up, the sound of him chirring a little as he found a good feeding spot on the Douglas fir.

I was just looking out the window, wondering when — or if — the rain will ever stop. And I saw an adult red-breasted sapsucker in the cotoneaster, the one we call the bird tree because it hosts grosbeaks, warblers, tanagers, and sapsuckers, sometimes several of these at once. I quickly realized there was also a juvenile sapsucker in the tree too, sitting on a branch while the parent industriously drilled into the bark. Then I saw the young one open its beak and the parent fed it — well, what did it feed it? Bugs in sap? A simple drink of sap? I managed to take two photographs but of course missed the actual moment of the feeding. But in the second image, you can see the young bird with its beak open and waiting. 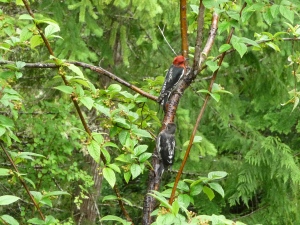 This morning I was talking to Alan Jamieson — he and Miranda Pearson read at the Arts Centre in Sechelt last evening, a lovely event, and then returned to our house for the night… — in the kitchen when we both noticed a strange bird on the railing of the deck. It was trying to perch and couldn’t seem to find its balance. When I went to the sliding door to watch, I could hear the churring of sapsuckers in the trees below the deck. Then it dawned on me: this was a young sapsucker, one of this year’s hatch, and it was the offspring of the pair which have spent the last few weeks in the cotoneaster just by the deck. I knew that the adult birds were making wells in the bark of the tree for sap to collect and I knew that insects were attracted to, and trapped by, the sap as well. But I hadn’t made the obvious connection: that they must have nest a nearby and that they were drinking sap themselves and taking insects back to the nest.

Later we went for a walk and the air was full of the sound of sapsuckers encouraging or scolding their young who were flying with them from tree to tree, the young clumsy and new to flight. I saw two young ones, each shepherded by an adult, fly from one tall fir to another (I suspect their nest is in a standing dead cedar not far from our house). And just now I saw this young one in the cotoneaster, trying to hold on to the trunk as one parent busily fed on a lower branch, stopping from time to time to give directions which the young bird seemed to ignore. Keeping its difficult balance was all it could do for now.

All the years I’ve lived here and watched birds build nests, hatch young, teaching those young to fly and make their way into the wild blue skies, I’ve never seen this moment in the lives of sapsuckers.

Small update, the next morning: one of the young sapsuckers came to the sliding doors leading from the deck into our kitchen (I’m describing this from its perspective, not ours…) and clung to the screen, looking at us with such urgency that it felt like a visitation from…well, you can fill in the space.