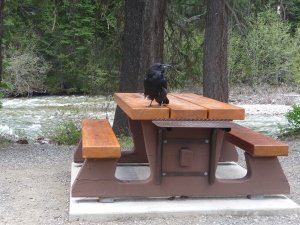 I think I’ve admired ravens my entire life. I remember family camping trips when I was a child and being enthralled by the sound of ravens in the deep coastal forests where we’d set up our tent. Bigger than crows, intelligent, with an extensive vocabulary, they inhabit our geographical places as well as our imaginations. They are pretty much monogamous. They have elaborate social structures. (Read Bernd Heinrich’s books to learn more about this.) We’re lucky enough to have many of them around us most of the time. One of our regular walks takes us up past a winter roost. We watch them and listen to them gossip and argue. There’s always something interesting happening up in the roost and listening to them discuss stuff is fascinating. And we talk to them, though our command of their language is limited. Still, you can stop them in mid-flight by doing the sound that is sort of like knocking on a hollow drum — click your tongue against your palate with your mouth open. If there are ravens around, they’ll almost certainly check you out. They’ve learned to use highways as food paths, flying quite low to the road to take advantage of road kill.  And if you see one huddled over a dead squirrel or robin, it will quickly turn and walk away, looking very casually in the opposite direction, as though to direct your attention away from its food source. They’re opportunists. They’re clever. They work out how to feed themselves and their network. Some calls — I have to say I don’t know which ones — are directed at letting others in the roost know about potential food sources.

It was interesting to read this piece this morning on recent research into their “abstract thinking”.  An experiment indicates that ravens know when they’re being spied on and protect their food caches accordingly. There’s a section at the end of the paper in which the authors wonder if their experiment proves that ravens have a Theory of Mind. It’s always kind of funny when science uses human proposistions to talk about animals, as though, with a bit of work, ravens or wolves or chimpanzees can somehow aspire to be more like us. I think ravens are astonishing birds. They’ve fascinated us and beguiled us and instructed us for as long as we’ve shared the same territory.

A few summers ago, we were driving through Manning Park with a friend and we stopped for a picnic. This raven spent time with us, close enough that we could see it had a deformed beak. (I believe this is an example of “avian keratin disorder”, caused in many cases by environmental contaminants. This bird was quite far from potential sources of such contaminants, though.) You can see that it’s pretty close to where we were sitting and managed to beg food from us quite successfully. It’s messy — this beak condition sometimes means that the birds can’t preen efficiently.

Long before Europeans were contaminating the air and water of the coast, there were crooked-beaked ravens around. In the winter ceremonials  of the Kwakwaka’wakw, in the Hamatsa secret society dances, Galuxwadzuwus, or Crooked-Beak-of-Heaven, cracked open men’s skulls and ate their brains. A Theory of Mind in the making? Or pragmatism? Does it matter?

My old friend, the late Charles Lillard, spoke fluent raven and wrote of them so memorably that I only got his last book out to check the punctuation. The poem was as vivid to me as it was when I heard him read it twenty years ago.

Out westward the surf washes across the Lord Luckies.

At Sitka the cathedral bells call out their prophecies.

Above these flames, above this crimson beach,

the black sanctus rising into the morning sky.

(from “Closing Down Kah Shakes Creek”)

Some surprises today as I watered and picked a salad for our dinner:

The first was where the tree frog was taking its rest, out of the direct sun. (You can see its back and lower legs just below the nest on the right.) What on earth was it doing tucked in behind two small paper wasp nests? 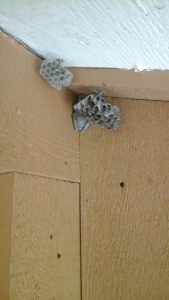 See how grey it is? And no wasps, though they were certainly there yesterday. I was curious to know if frogs eat wasps and it turns out they do. I’m not sure this one ate the caretakers of these nests but maybe it made its breakfast of the pupae. I know it might seem odd to allow nests in an area where we spend a lot of time but these particular wasps are not very threatening. In early summer, while we drank our morning coffee very near this wall, they’d pass us as they built their nest and never once showed any interest in us. Not like yellow-jackets which are kind of annoying this summer (their populations are cyclical and this year there are a lot of them). The paper wasps feed on nectar but they bring back insects to feed their brood. Aphids, caterpillars, and even the scale insects off the leaves of my Meyer lemon. And the nests themselves are architecturally beautiful — the cells are so uniform and clean and the paper itself is a marvel.

Yesterday this frog jumped out of this pot while I was watering the tomatoes. And it was deep green! 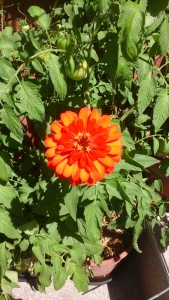 There was a cloud passing as I watered and when I looked up, I saw these ravens circling: 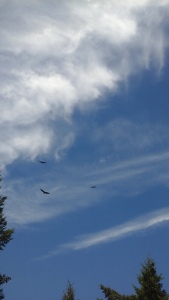 I wonder if it’s a coincidence that they’ve arrived just a day after we were visited by a doe — I think the same doe who has been coming many mornings with her twins. But yesterday she only had one fawn. There are all kinds of reasons for a fawn to die young, the local coyote family being one…And maybe the ravens are hanging around for their share, “downe in yonder green field.” I love the Child ballads and found myself humming this one as I finished the watering.

There were three rauens sat on a tree,

The one of them said to his mate,
Where shall we our breakfast take?

There lies a Knight slain under his shield.

On this morning’s walk, I saw signs everywhere of the living. A few weeks ago, it was the dead — the spawned-out salmon, the skeleton of an elk, even my own heart feeling emptied somehow. (Christmas over, children gone back to their daily lives, the tree undressed and put on the burning pile…) But today — a chorus of frogs loud in the woods, these woods —

— and two ravens klooking loud overhead, full of intention (and possibly nesting nearby). Swelling buds in the salmonberry thickets, though it will be another three weeks (I predict!) before the first cerise petals ease themselves out of the sepals. And in the garden, the first primulas in bloom, low among the leaves,

and enough shoots of fennel to flavour a salad,

which might have a few leaves of red-veined sorrel:

While I was looking at new life in the garden, a tree-frog was singing hopefully nearby, though I couldn’t find it for a photograph. Every year they lay eggs in the old bath-tub turned into a garden pool and every year I find them among the parsley or curled up in the cool green garden hoses or climbing the window by the dining table. Here’s one from last year and it might even be the one I heard singing: