Every year I buy at least one new rose and this year’s is an airy David Austin called “The Lark Ascending”. While I was watering this morning, I leaned in to smell the open blossoms, so fresh and lovely. What’s in a name? So much. The name led me to thinking about war and about violence and the whole week of noise. 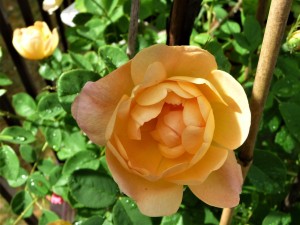 A week when the airwaves were filled with sound and memories of the Normandy landings 75 years ago and also a week when the report on the Murdered and Missing Indigenous Women and Girls was released. I  haven’t read the report yet although I’ve been working through the Executive Summary, itself 121 pages. The introduction discusses the use of the term “genocide” to describe the acts of violence against women, girls, and other First Nations, Inuit, and Metis people. The term was coined by Raphael Lemkin in his book, Axis Rule in Occupied Europe (1943). His definition includes psychological and other non-physical acts to undermine and destroy the foundational structures of race and culture.

Generally speaking, genocide does not necessarily mean the immediate destruction of a nation, except when accomplished by mass killings of all members of a nation. It is intended rather to signify a coordinated plan of different actions aiming at the destruction of essential foundations of the life of national groups, with the aim of annihilating the groups themselves. The objectives of such a plan would be the disintegration of the political and social institutions, of culture, language, national feelings, religion, and the economic existence of national groups, and the destruction of the personal security, liberty, health, dignity, and even the lives of the individuals belonging to such groups.

Last year I read East West Street, by Philippe Sands. It’s a stunning exploration of family history set against the backdrop of the Second World War and also a detailed account of the legal foundations of the Nuremberg trial. I found the information about the actual resistance to using Lemkin’s word genocide fascinating. The resistance was to the concept of group identity in the law versus the individual.

Every newspaper columnist and every politician has an opinion, of course. And it seems that most of them are uncomfortable with the term “genocide”. But history catches up with us. It does. And we’ve learned some lessons about our country and ourselves in it. While I was a child walking to school along Fairfield’s mild and tree-lined streets, Indigenous kids were being forcibly taken from their homes to schools that had been established to educate them in ways that ignored their family systems, their culture, their languages. Listen to Duncan Campbell Scott in his role as a bureaucrat in the Department of Indian Affairs:

I want to get rid of the Indian problem. I do not think as a matter of fact, that the country ought to continuously protect a class of people who are able to stand alone. . . . Our objective is to continue until there is not a single Indian in Canada that has not been absorbed into the body politic and there is no Indian question, and no Indian Department, that is the whole object of this Bill.

Lemkin argued that the term genocide was appropriate and vitally important during the Nuremberg trial not because individual rights were less important than group rights but because the reality of what happened in Nazi Germany was that individuals were killed because they were members of targeted groups.The prevailing ethos of the trial was that it was about crimes against humanity, individuals.

So yes, we’re uncomfortable with the notion that genocide can happen within our borders, in our communities, on the long highways of our country, in its rivers where so many young women were thrown, in its courtrooms where an Indigenous woman’s torn vaginal tissues can be shown to all as evidence of supposedly consensual rough sex. Would we be any more comfortable if the MMIWG Report suggested that our country was guilty of crimes against humanity rather than genocide? Words are important but so are deep-seeded (and nurtured) attitudes, embedded in our culture like weeds.

Listening to elderly men talk of their experiences on the beaches of Normandy, I kept hearing “The Lark Ascending”, the beautiful tone poem by Ralph Vaughan Williams, composed against the military maneuvers of the First World War. One story is that he was vacationing at Margate and saw the fleet exercises in preparation for embarkation. I have several recordings but I think my favourite is Hilary Hahn. Her bow takes us over the fields of England and France, lets us hear the transcendent notes of a lark’s song, but in it we also hear loss. We are in the presence of beauty haunted by violence.