The mushroom has a traveller’s face. We know there
are men and women in Old People’s Homes whose souls
prepare now for a trip, which will also be a marriage.

— from “The Mushroom” by Robert Bly

This has been a rich season for mushrooms. Chanterelles, shaggy manes, a gift of dried porcini from my friend Anik who spent the summer in Dawson City, and the coveted matsutake, or pine mushroom. The week before last, we found about 20 of them on our walk, in a place where we usually find a handful. Another walk yielded more. And today, unexpected treaure on the Sakinaw loop walk. Tonight we’re having pizza — dough for the crust is rising by the woodstove and in a few minutes I’ll pick some kale. Delicious fresh mozzarella from Fairburn Farm water buffalos. Garlic from the summer’s bounty. And some proscuitto from, well, who knows. And a matsutake thinly sliced and sauteed in a little olive oil. A marriage of autumn flavours, gifts from garden and forest, before winter appears over the mountain. 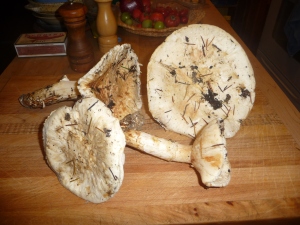