A few days after we’d arrived in Ottawa to meet our new grandson Arthur, we went to Toronto where we had the opportunity to spend a couple of hours at the Royal Ontario Museum’s Pompeii exhibit. And in the way these things do, the experience of seeing the remnants of that extraordinary city — both the timelessness and the vulnerability of human creation — fused in my husband’s imagination with the tender moments he had with his new grandson. He printed this broadsheet as a celebration of Arthur’s birth. I love the umber pillars (echoing the leaves), the birds, the memory of John cradling the sleeping baby and walking him, as he walked our babies when our rooms were still new and our lives were before us.

When I visited the excavated site at Pompeii in 1975, I remember feeling such a sense of distance. There were olive trees and cypress and the long cobbled roads of (and to) the past. You could join a group walking up Mt Vesuvius — I didn’t — and it wasn’t ’til several years later that I read this description of the mountain and its power by Pliny the Younger who wrote to a friend after the eruption in 79 A.D. “…  its general appearance can best be expressed as being like an umbrella pine, for it rose to a great height on a sort of trunk and then split off into branches, I imagine because it was thrust upwards by the first blast and then left unsupported as the pressure subsided, or else it was borne down by its own weight so that it spread out and gradually dispersed. In places it looked white, elsewhere blotched and dirty, according to the amount of soil and ashes it carried with it.” The younger Pliny’s uncle died of fumes and was described by his nephew looking as though asleep. Today we spent the afternoon at the Pompeii exhibit at the Royal Ontario Museum and I thought that the plaster casts of those who died under ash and molten lava looked serene, too.

It was so moving to see them and to understand something of their lives before everything ended. Their beautiful mosaics, the dishes of carbonized figs and olives, cooking utensils so nearly the same as ours (a skillet, some pastry molds, a glass dish very like the one we use for trifle at Christmas). Tools — a builder’s square and clamps, calipers. Maybe not the glirarium, used to rear and fatten dormice for the table: 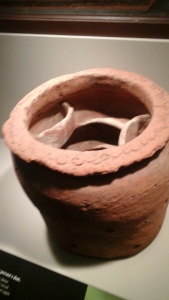 But I think of the dogs we’ve loved and cared for and I loved this mosaic:

and I was sad to see the subject of the mosaic after it had suffered the same fate as its family: 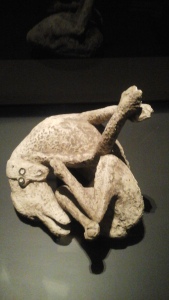 In 1975, I thought how far away was the past and its cataclysms, and on a different continent too; but today it seemed so possible, as our global climates shift and change. Pliny again: “Many besought the aid of the gods, but still more imagined there were no gods left, and that the universe was plunged into eternal darkness for evermore.” The cobbled roads have survived and we can walk them, figuratively or actually, and imagine that we feel the first light ash settling on our shoulders.