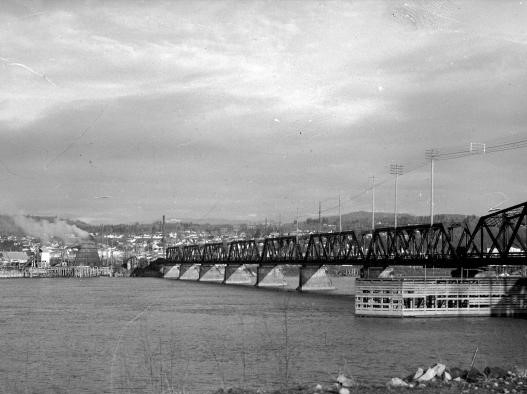 Last night I dreamed so vividly of a place my family lived in the 1950s, at the foot of Poignant Mountain, and a drive across the Fraser River to Mission City. I dreamed and woke and couldn’t believe how the years had passed.

All the mystery of waiting at the river for the bridge to come down, the dark water, the glowing of the beehive burners, the anticipation of an egg salad sandwich and a chocolate milkshake. A crossing I loved. From Matsqui to Mission, from our side of the river to the other. And returning, driving home over the bridge again, from the shadow of the mountains to the open prairie, along Riverside Road, past Miss Kemprud’s where we went for ice-cream during Sunday drives, past the school my younger brother attended, past the hall where, at the age of five, I’d been in a fashion show—I modelled a tartan skirt and short-sleeved sweater from Eaton’s, which I hated and which my mother bought for me afterwards—along Harris Road, then Glenmore, house lights golden in the black fields, turning right on Townshipline Road until we reached our own driveway, the quiet barn with its sleeping cows, and the sound of frogs loud in the slough. I’ve turned a dream into a memory. But in fact both are the same.

Across dark water, I went from childhood to adolescence. The house at the end of the row by the radio base was not the house we returned to from Mission City in the dream that was also a memory. It was a white house on a farm on a long road, but that road led back to the foot of Poignant Mountain, forgotten and then found, lard pails stained by blueberries and abandoned on the verge, a small girl huddled in the cool bunker where the milk waited to be collected and where I wait now with her for the end of the world.

There was a baby shower for someone at the Ridgedale Community Hall and I remember attending with my mother while my older brothers were at school and my younger brother played at the home of a neighbour. The women were all dressed in their best, several of them, my mother included, wearing their fur coats. My mother’s was muskrat, which made me wonder because we saw those animals in the creeks leading down from Poignant Mountain. The shower involved games which the women entered into joyfully, taking ribbons from the gift-wrappings to turn into a hat for the celebrant, and then watching as the mother-to-be held the little sweaters and nightgowns they’d brought to her face before handing them around the circle. There were soft blankets and rattles, diaper pins with clasps of pink and blue, and tiny bonnets of pleated cotton. Tea was served in china cups and each woman had provided squares or cookies or tarts, arranged on paper doilies spread over delicate plates. Most of the women smoked, holding their cigarettes between fingers which sported neatly shaped and coloured nails, even though many of them were farm wives. I watched their hands move through the haze of smoke, gesturing and emphatic. I became drowsy among the murmurs and the laughter, and found the table where the coats had been carefully laid, curling up among the muskrat and camelhair until someone lifted me gently from the pile, saying it was time to go home. I found my mother’s legs to bury my face in, rubbing it against the fur, then realizing that everyone was laughing at me because it wasn’t my mother at all – her coat was still folded on the table – but a woman who’d never had a child.

My older brothers went to school in Matsqui but there was no kindergarten class (the year I was eligible for) so I stayed home, waiting for the bus to return them each day. Some days one of the girls they returned with handed out the crusts of her sandwiches, soft white bread that we never had at home. I’d crouch on the boulevard like a wild child, wolfing down crusts with their faint taste of tuna fish or ham. And what did I do, those long days waiting for my older brothers? I made shelters in tall grass with my younger brother and several other children too young to attend school, rooms we created by lying on the ground and crushing the grass flat, shaping each room to our bodies’ dimensions, ceilings the blue sky. We couldn’t be seen from the row of houses though our mothers could hear our voices so they knew where we were and that we were safe from possible danger. In our airy house, we exchanged our clothes with each other. Whose idea was it? I don’t remember. But we were caught out when I put my own undershirt on inside out and my mother discovered grass seeds in its thin cotton. There was conferring, there were questions: how far had the damage gone? I was used to wearing my older brothers’ hand-me-downs so it was no big deal to wear a boy’s shorts for an hour, to hand my underpants to another child and wear his or hers for the duration of our game. But some of the other mothers nipped that game in the bud, their mouths tight and fierce as they led their children home. The grass slowly rose again in our abandoned rooms.

Once or twice that I remember, I waited with my parents for my brothers to be released from their classrooms on Friday afternoons and then we drove over the Mission bridge to shop at Eatons. We’d eat supper at a cafe on the main street of Mission City, a hamburger or egg salad sandwiches, accompanied by milkshakes served from tall metal beakers beaded with moisture. The waitress would pour some of the contents into a glass and then leave the beaker on the counter so we drink the remainder once we’d finished what was in our glass. We’d suck up every last drop with our straws, running its tip around the bottom of the glass until our father scolded us for making farting sounds with the straw. Stop that, he’d order, the vein on his forehead pulsating in the way it did when he lost his temper. We usually knew just how far we could push him but sometimes we underestimated and he’d take us outside and wallop us on the sidewalk. Our mother never protested. We were wilfulness, to be controlled. We were wildness, to be brought to a civilized state by the rod.