I was sitting at my desk when I saw three pileated woodpeckers fly past my window. They were squawking and I realized I’d been hearing that sound since I woke but it was sort of in the background of other morning noise: the kettle, the news, the cat. So it took a few moments to register. And then I remembered a similar hullabaloo, two years and a week ago, when I was out in the morning, removing the string and banding and clamps from a batch of indigo dye work. 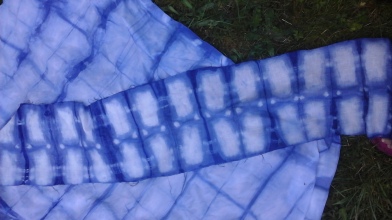 I’m guessing the young have just left the nest and are learning the territory: which trees are best for ants, how to pick huckleberries and saskatoons. How to use their voices for the best effect. As the world turns, as the days repeat themselves, so does the work. I have a basket of fabric prepared for the dye vat and am hoping to get to it soon.

Two years ago I was dyeing fabric and listening to woodpeckers and anticipating the September birth of Henry. This morning I’m thinking of Edmond, a week old today, and how philosophical he looks in this photograph that arrived last night.

In the book I was reading two years ago, Memory on Cloth: Shibori Now, Yoshiko Iwamoto Wada writes that, “The cloth sensitively records both the shape and the pressure; it is the “memory” of the shape that remains imprinted on the cloth.” Maybe we are cloth, we are the very fabric of being, the world recorded on us like blue dye, the sound of woodpeckers echoing in the trees just beyond.

Readers of Mnemonic: A Book of Trees might remember my adventures in learning — in trying to learn — to sing, inspired by the beautiful aria, “Ombra mai fu”, from Handel’s Serses, or Xerxes, in which the Persian king Xerxes I sings of his love for a plane tree.

A shade there never was,
of any plant,
dearer and more lovely,
or more sweet.

The opera was a failure but this particular aria lives on. And I’ve been humming it these days as I move about my day, watering, turning on fans, thinking about cool things to make for our dinners. Exactly a week ago, friends came for dinner and we sat on the deck for our apertif, shivering a bit in the unseasonal weather, and John and I decided it might be time to have the tall firs to the west of our house limbed and maybe one or two of them taken down. For years it was too hot in summer to eat on that deck — we tended to have our dinners on the patio which faces northeast… We built a pergola over it and planted wisteria and grapes which didn’t do much for four or five years. Then they took off, filling in between the beams of the pergola, providing green shade. And was it too much shade, combined with the firs which have also grown substantially since we moved here 30 years ago? Last week it seemed that it was.

Now we have true summer heat. That deck is a welcome haven from it. Tonight we sat with a glass of Portuguese gazela, a light bright wine with a bit of animation, and ate tarragon chicken with tiny roast potatoes, dusted with La Chinata bittersweet paprika, prepared first thing this morning before the sun was up, and a favourite summer salad of watermelon, feta, fresh mint, dressed with lemon and Greek olive oil: 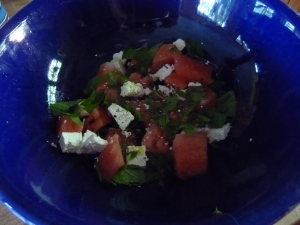 “Let’s leave the firs,” I said. And John agreed. Their shade so welcome, so beloved. I thought of Herodotus, who commented on Xerxes’ adoration of the plane tree in The Histories: “While [he] was traveling along this road he discovered a plane tree that so impressed him with its beauty that he endowed it with golden ornaments and entrusted it to one of the Immortals…” For the past few weeks, these firs have been the training trees for the young sapsuckers, a family of western tanagers, robins, and even a pileated woodpecker with its vivid head.  A shade there never was…more lovely, or more sweet.