As the year comes to a close and the old stories are told around fires as ancient as time, I am doing the final copy-edits of a novella, Winter Wren, which will be the first offering of FishGottaSwim Editions, a project initiated by me and my friend Anik See to showcase novellas. Watch this space for further details in the new year!

This morning I went out to fill the bird feeder and watched the chickadees dart to and fro for seed. And almost underfoot, a tiny wren also darting among the sword ferns for whatever little insects lurk there. Last night we were eating a festive dinner to celebrate John’s birthday and we had the deck lights on. Angelica noticed it first — the wren flitting from railing to herb pots to windowsill. This is their time. Do the songs and stories bring them or do they call up the songs and poems? Carol Ann Duffy, Britain’s Poet Laureate, has written a Christmas poem which begins this way:

The old year, a tear in the eye of time;
frost on the blackthorn, the ditches glamorous
with rime; on the inbreath of air,
the long, thoughtful pause before snow.

A star on the brow of a mule in a field
and the mule nuzzling the drystone wall
where a wren, size of a child’s lost purse,
hides in a hole. St. Stephen’s Day.

(you can read the rest of it here: http://www.theguardian.com/books/2015/dec/19/wren-boys-carol-ann-duffy-christmas-poem )

This morning I watched the wren as it went about its search for breakfast and when I came in to my desk, the first thing I saw were two chunks of sandstone from the beach west of Sooke where my novella takes place. They’re filled with fossils and I keep them handy as paperweights and reminders of time, how it can be compressed into stone, 25 million years’ worth, to hold in your hand as you think about birds and their stories, light and darkness, and stars. 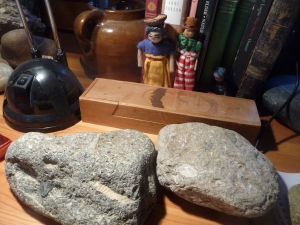 It was so tiny. The wren let him approach and quick as anything he had it in the net, dropping it into a bag with a small cloth soaked in chloroform. The light in the dark eye went out.

He made the incision from cloaca to sternum through the belly. Clipped the humerus just below the shoulder joint and skin to the base of the beak. Cut through the eye membranes on the inside and through the ear canal at the skull. Severed the skull at the atlas vertebrae.

There was hardly any tongue or brain to remove, hardly any tissue at all. He dusted the skin with borax. He hoped this wasn’t the bird that hunted in the salal every day, disappearing like a mouse among the stems, plucking insects from the moss. He knew there were several in the immediate area but that one was reliable; he saw it most days and heard it when he was out cutting firewood or bringing up water from the creek. He was sure it was the source of the notes he had so carefully transcribed, listening and asking himself, was that little run e-g-e-c? Are they sixteenth notes? Now, there? A rising run, g-b-d-g? That was the bird he had drawn, its pert tail and brown legs. And probably this was that very wren.

He needed money. There were always requests for his work—he was known for meticulous preparations. So he worked down the list, doing what he could. He could not afford to be sentimental.

Its bright eyes—and oh, its song! At night he heard it while out in the corridor nurses chatted and prepared medications. Don’t be sentimental, Tom, he told himself. When they came to put a small pill in his mouth, he kept his back turned away so they wouldn’t see the tears.