— we walked with friends over by Oyster Bay. More than ten years ago I wrote a novel, A Man in a Distant Field, in which the main character, an Irish schoolmaster, washed up on the shores of Oyster Bay. I explored the area a fair bit in those days, wanting to give my character a true place to live, a particular place on earth, and this particularity — the weather, the scent of wild roses in summer, the water birds, the bears that came to feast on salmon in autumn, the oysters on the rocks by the shore — would allow him to understand the resonances in the poem he was translating (which happened to be the Odyssey). And walking again by the bay a few days after Christmas, I felt that old complicated obsession a writer shares with her materials. While the others stood down by the water and watched a hawk on the opposite shore, I dreamed my way back into this abandoned cabin, not exactly the one I called World’s End in my novel, but a similar one. (As Melville so wisely noted, “It is not down in any map; true places never are.“) 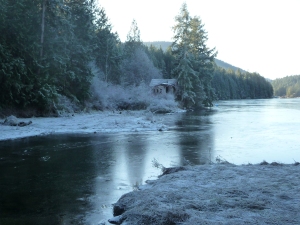 He put the poem aside and walked out to the shore. He never tired of the bay, stretching out to open sea. Today the tide was coming in over the exposed mud flats, threaded with silvery runs of fresh water. There were birds everywhere — sandpipers on the shore where he supposed their nests must be, ducks coming in with the tide, a solitary loon, silent in daylight, geese gathered by the small rocky islands where some of them nested. He loved the smell when the tide came in, the rich fecund mud, warmed by the sun, meeting the sharp iodine of the sea. He supposed men had always stood by water, admiring the liveliness of its movement, loving the sight of birds feeding on its shores, fishing its depths with their strong bills. (from A Man in a Distant Field, Dundurn, 2004)

To keep up with the kale — which is last year’s planting and it’s wanting to bolt but this year’s seedlings aren’t quite big enough to begin cutting — I’ve been making green pie. Two big ones today, one to eat over the next few days and another for the freezer. Tomorrow I’ll make a couple more. When our plane landed in Vancouver last Tuesday, after 12 days in New Mexico and five in Edmonton, I thought how beautiful and lush everything was. Grass, trees, even sea itself as we drove home up the coast highway. And when we got to our place, it was the kale I saw first of all. I thought of the lines from the Odyssey, when Odysseus visits Phaiakia (and I think they are even better in the Fagles translation than the Fitzgerald which is the one I usually consult, mostly because it was the one my wonderful Classics professor Peter Smith taught to us in 1974):

“And there by the last rows are beds of greens,

bordered and plotted, greens of every kind,

So kale and dandelion greens and blood-red sorrel, picked while still glistening with morning damp. 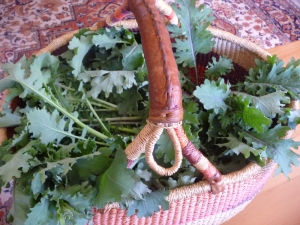 And they steamed down to this:

I mixed them with chives, mint, and last year’s (frozen) dill, eggs, some delicious fresh feta, and arranged the greens over the filo, bringing out the Greek olive oil which had languished in a dark cupboard and looked like it should spend a little time outside first, reclining on the rosemary: 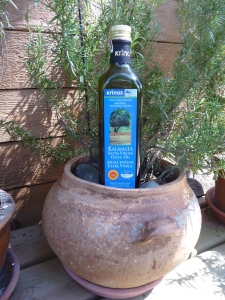 And now the green pie is cooling on the worktable while we enjoy a glass of wine outside, in sunlight, with a few mezes — beet and toasted walnut spread on little rice crackers, some peas, a hummus made with roasted carrots and chickpeas. 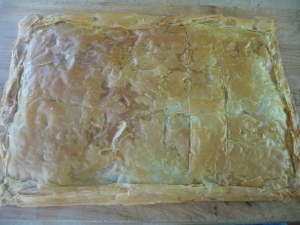 After one of the wonderful extended catalogues for which the Odyssey is justly famous, listing those rows of greesn, figs, apples, and every other kind of fruit, the vines which would yield wine, all watered from a clear fountain, Homer ends the passage by saying, “These were the gifts of Heaven.” Who can argue?

It won’t stop raining. Too wet to go out to the garden, too wet (almost) to go for a walk up the mountain. It’s a bread day so the house is filled with the scent of loaves baking. Because I’ve been thinking about the Odyssey lately, specifically the moment when Odysseus returns to his home (in disguise), to see his old dog die on the manure heap, the faithful dog Argos who’d waited twenty years for his master to return, and because I love Telemakhos’s generosity —

took an entire loaf and a double handful

of roast meat; then he said to the forester:

“Give these to the stranger there…” (Book Seventeen, lines 336-40, in Robert Fitzgerald’s fabulous translation)

— I’ve made some pita to have with ground lamb tonight, along with some of these ripe tomatoes, feta cheese, garden arugula in Greek oil, and maybe a glass of retsina which luckily we just happen to have in the fridge. 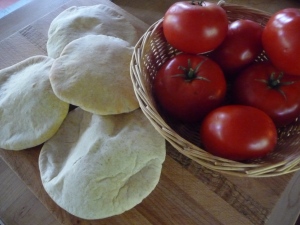