Well, it’s quiet here — apart from roosters down by the lake — but not still. When you take the time to see what’s going on, it’s astonishing. We were just having coffee on the deck off our second-storey bedroom and we saw the mason bee we’d noticed yesterday. There’s a tiny hole in the siding and yesterday the bee was going in and out of it. Today it was just hovering around the entrance. When it left, and I looked closer, I saw that the hole has been filled in with mud. I got out the National Audubon Society Field Guide to Insects and Spiders to try to figure out what was going on. I learned that the female mason bee constructs small nest cells of clay which she provisions with pollen and nectar before laying a single egg. And then I read this, which is as much of a found poem as anything: “Some species include plant fragments in their nest construction. Others build inside empty snail-shells, and still others line each nest with snips of flower petals.” 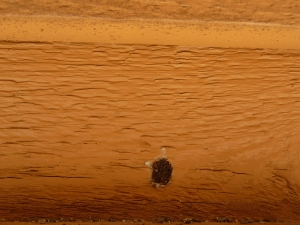 There are also a lot of mud-daubers around right now, looking for ideal locations for their nests. Here’s one building just outside the bathroom window: 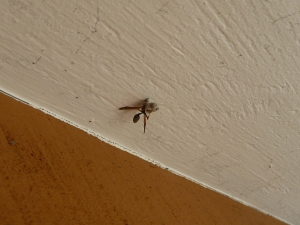 In the notes on mud-daubers, I discover more interesting drama that happens without us even noticing:”Using its mandibles, female shapes small masses of moist mud into balls and makes joined tubular cells. Into each cell female stuffs 1 paralyzed spider, immobilized by venom, then lays 1 egg on spider and closes cell with mud.”

And speaking of drama (though in quite a minor key), I saw a snake yesterday rush up to an area below a little Japanese maple, its mouth stuffed full. It appeared agitated and after shoving its face into the moss, it lifted its head, mouth now empty, and began the process of trying to get its jaw back into position. (Garter snakes can unhinge their jaws while eating large prey.) Because I was there, it moved away a little and rested its head on a small stone, opening and closing its mouth, like a cat yawning. (I could see inside its mouth and it was red!) I poked around in the moss and saw that the thing it had been carrying was a huge slug. I thought I would help by tossing the slug to where the snake had by now eased its jaw back into place. But instead of taking the slug,  it returned to the moss and began to plunge its head down, looking for its dinner. Here’s the snake this morning, in the same area. I never knew they cached food. 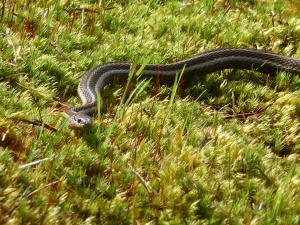 Because we are anticipating our first grandchild in July, I said to John, “Won’t it be wonderful to show small children these things?” To which he rolled his eyes and made texting motions with his fingers. (We don’t own a cell phone which is why I have a huge reference library of field guides to use instead of looking up mason bee behaviour on a smart phone.) But honestly I can’t imagine a child not wanting to watch a snake dislocate its jaw and yawn like a cat or fail to be delighted at this tree frog taking the sun on a May morning: 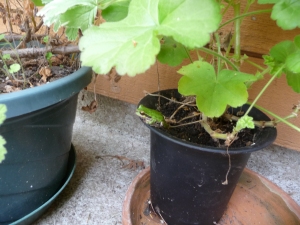