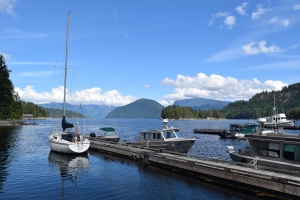 We were sitting on the deck of the Backeddy Pub in Egmont, waiting for our dinner, when someone at another table suddenly called out, Orcas! By the island! We stood at the railing and sure enough, there were two of them out where Jervis Inlet meets Sechelt Inlet. We watched them surface and then very elegantly disappear for a time, surfacing again further north. Then the couple sitting on the other side of us quietly said, There are more, just there between those boats…

Those orcas were hunting seals. They’d approach the little rocky islets where the seals pull out to bask and then there was a lot of splashing as they ambushed the seals. Meanwhile the people on the yacht fiddled with their crane, pulling up their zodiac, someone else was reading on the deck of a boat,

And then the huge beautiful orcas were gone.

For some reason, I thought of Auden, his poem “Musée des Beaux Arts”:

In Breughel’s Icarus, for instance: how everything turns away
Quite leisurely from the disaster; the ploughman may
Have heard the splash, the forsaken cry,
But for him it was not an important failure; the sun shone
As it had to on the white legs disappearing into the green
Water, and the expensive delicate ship that must have seen
Something amazing, a boy falling out of the sky,
Had somewhere to get to and sailed calmly on.