Last night I dreamed of stairs. I was ascending, not descending, and it seemed the stairs went on forever. It was exhilarating but there was also a sense that I had no idea where I was going. I was afraid to look back but I knew I should try to remember everything that I was leaving as I climbed.

I think the dream came from seeing this pile of old cedar yesterday: 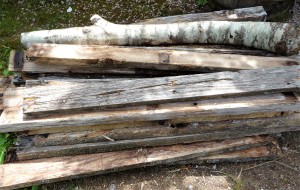 John was splitting some rounds of fir and getting old lumber ready to cut into usable lengths for the woodstove and this pile represents the old stair treads he replaced a few weeks ago. The stairs are the ones that lead up from the grass on the east side of our house to the deck that wraps around two sides of the second storey  and serves as a roof for three bedrooms below it. Our bedroom opens into a sun-room and the sun-room opens onto the deck. It’s where I grow tomatoes against the warm south-facing walls and where we have our coffee each morning. There’s also a collection of potted roses and a Meyer lemon tree (this moves into the sun-room each winter and produces enough fruit for marmalade). We built this deck when we extended our house in 1990 to accommodate growing children and I think the stairs were built the next summer, in 1991. I remember Kate Braid coming for lunch (and also to sign copies of her poem “Concrete’s Coming” that John printed as part our High Ground Press poetry broadsheet series) and the two of them looking at the stringers, talking about the best way to bolt them to the house.

The treads needed replacing. The original wood came from a little mill on Trout Lake Road where the sawyer sold cedar 2x4s that were odd lengths and where we bought a lot of this cedar for decks, The roof that also served as a deck was once something called “torch-on” I think—heavy roofing felt applied to plywood—and we built decking over top, using rough cedar in sections that could be lifted to clean underneath. Those sections were so heavy to lift and eventually the torch-on needed to be replaced and the local roofers didn’t want to do it. So we replaced it with a membrane that is very durable and makes a good deck surface without the fuss of those moveable sections of cedar. Some of those sections were dismantled and used to frame garden boxes. 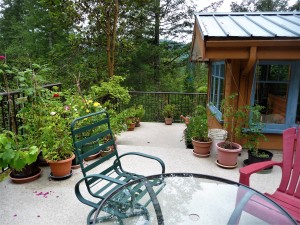 But the stairs went on. I’ve gone up and down them thousands of times. There’s a Mme. Alfred Carriére rose growing up one set of railings. I’ve lugged buckets of soil up and down, bags of manure, compost, plants, chairs, pots of tomatoes and roses, and sometimes I’ve sat on the stairs because the sun had just come up and those cedar treads were the first place to warm up. Just beyond them is the copper beech tree where I scattered the ashes of my parents.

Last year when we were away in Alberta helping Brendan and Cristen build a deck of their own, the neighbour who was feeding the cat phoned to say that bears had come up the stairs to drag pots of tomatoes part-way down. This year I’m sort of waiting for the mama sow to remember and to guide her cubs up to try again. Weasels have come up the stairs and somehow a snake found its way up too.

There was something forlorn about the stack of old stairs by the woodshed. We’ll burn the wood; it won’t go to waste. But all the times I trusted their strength to take me up and down, to take my children, then my grandchildren up and down: was that why I dreamed of stairs rising and rising, take me to some unknown height?

The man who built the stairs (affectionately known to me as John) asked that I post a photograph of the new stairs.

It’s my daughter Angelica’s 30th birthday today. I was 30 when I gave birth to her, our last child. My memories of that autumn are happy ones. I’d bathe her in a plastic tub on the dining table with sunlight streaming in the big window. She loved her father to hold her on his stomach as he watched television — he’d pat her back and sing little songs to her. And her brothers were fascinated by her and quite impressed that she knew them well enough to bring them a special gift home from the hospital — a Playmobil gas station, complete with tiny parts that all had to be assembled in secret by parents and grandparents late into the night before they discovered it the next morning.

Having a daughter has been one of the great pleasures of my life (as is having sons, but the pleasures are different, something I’ll try to analyze another time). I’ve had access to a thread that runs from girlhood to womanhood and back. As a writer this has been so valuable. When I was writing my first novel, Sisters of Grass, Angelica was about ten. And when it was finally published, she was 16, nearly the age of the novel’s protagonist Margaret Stuart, who is a young woman living in the Nicola Valley in 1906. That period intrigued me — so much of the valley still retains traces of that time: names on gravestones, old buildings, a legacy of ranches and settlement. And Margaret Stuart is in turn fascinated with the cist burials she finds evidence of on the Douglas Plateau, particularly an incised bone drinking tube which would have been buried with a pubescent girl for her afterlife. Our family camped in the valley in those years and I felt as though I was seeing the world through a series of shifting transparencies, shapes visible now, and now, and now, and then fading as something else replaced them for a time. I know now that this was the awakening of the part of my imagination that allows me to write fiction but then I was in a constant state of wonder.

In the epilogue to the novel, I meditate on memory and the apprehension of those transparencies:

What secrets do the hills contain in their suede hollows, what mysteries are lifted from the stones in the unbearable stillness of morning? Which is the way where light dwelleth?and as for darkness, where is the place thereof? My daughter has rolled into the grassy hollow of the kikuli pit at Nicola Lake, closing her eyes as she imagines the life of its ghostly household in the time we nearly know as we sit on the shore of the lake. Looking up, she sees a fresh moon in the daylight sky, hears the girls singing wherever they might be — in memory, in photographs, crumbling bones under a cairn of boulders, a little necklace of elk teeth at what was once a youthful throat, in the heart, the imagination. You remind me a girl I once watched picking flowers. On the shoulders of the young girls, golden pollen; in their hair, a halo of seeds, ruffled by the breeze. If we are very quiet, they might sing to us, dry husks in the wind, dust of stars.

That line from Sappho is something I’d like to say to my daughter now. You remind me of a girl I once watched picking flowers. And here’s a bouquet of late “Mme. Alfred Carriere” roses, as sweetly scented as anything on earth, to say Happy Birthday, Angelica!