Yesterday I was returning to my car after a meeting in Madeira Park and I stood at the school fence for a few moments, watching children race around the field in a kind of wild disarray. Sports Day! I remember the same field, the same June sunlight, more than 25 years ago, as my own children completed the obstacle race, the relay, then lined up for hot dogs and dixie cups. As I turned from the field, I heard someone — a mother almost certainly — call to another, Who’s keeping time?

Good question. Who keeps it, tries to keep it, where does it go? I’m reading The Siesta and the Midnight Sun: How Our Bodies Experience Time, by Jessa Gamble. It’s a clearly-written examination of the biological clock and circadian rhythms and I’m hoping it can help me to figure out the notion of metaphysical time — its accumulation, its disappearance, reappearance, its questions and riddles. I think about it and then I don’t. But last night, after putting the book aside, I was awake for ages, trying to puzzle my way through an essay I’m currently working on. Family history again, ancient history, with its clutter of names and dates and missing elements. A passage from a recent New Yorker article has found its way into my consciousness and at times it feels like a guide:

“Scientists have sought for centuries to explain how animals, particularly migratory species, find their way with awesome precision across the globe…Dragonflies and monarch butterflies follow routes so long that they die along the way; their great-grandchildren complete the journey.” (from “How Do Animals Keep from Getting Lost?” M. R. O’Connor, May 28, 2016 New Yorker)

In Drumheller in April, I thought I’d be able to find my way to the very place where my grandmother stood in the doorway, children around her feet, to look out at her new surroundings, buckets waiting to be filled. I thought I’d know the smell of the earth, the soil that my father ran through in bare feet, and whose dust rose in summer to settle on laundry hung out to dry, on the surfaces of tables by open windows. I thought I’d know it. Recognize the wind. But instead we drove each wide street as though in a foreign country. Following clear and detailed instructions, we missed the turn to the cemetery and had to ask an Asian woman in the uniform of a fast food outlet, walking home with her head down. She was helpful with her hands, though her English was poor. As my grandparents’ English was rudimentary, even after 40 years in Canada. How many generations of dragonflies and monarch butterflies? How many generations of children buried among their own babies in the Drumheller Cemetery (that whoosh of time again), which we eventually found, decoding the map and the narrow lanes among the dead. How many buried until the language of grief flowed smooth and clear in the vowels of the new country? Gone, the palatalizations, fricatives, and trills of Central and Eastern Europe, the stops, the lost aspirates. Did I ever speak to them, apart from the urgings of my parents to thank them for gifts or to tell my age yet again, a girl among her brothers, arranged by height, each of us self-conscious in the summer heat, the long drive behind us and the promise of our cousins ahead. The promise of the Exhibition, each with a dollar in our pockets.

Who’s keeping time? Who is this woman — a photo found in my grandfather’s travel documents (the passbook that said he was travelling alone and had no right of return) —  and where did the last chapter of her own migration complete itself? If it ever did? 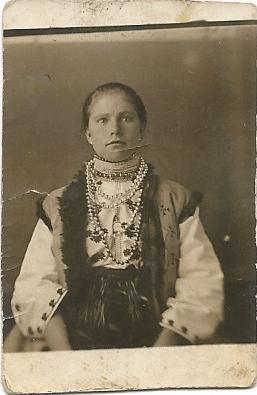