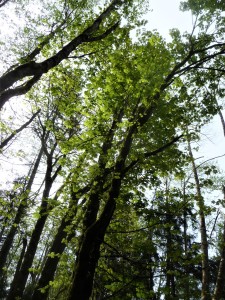 Some things on this earth are unspeakable:
Genealogy of the broken—
A shy wind threading leaves after a massacre

The other night I was up in the small hours, feeling unsettled. For a couple of weeks I’ve been having daily dealings with someone I finally decided I couldn’t engage with any longer. It was in a context outside my usual life and disengaging myself meant causing some friction in a larger way. I’m not used to giving up. But I had to.

So I was at my desk, working on an essay about my grandmother. Or is it really about my grandmother? What can I possibly know now of a life begun in 1881, far away, and what can I know of her early years in a new country, poor and foreign? Is is possible to comfort someone living more than a century ago? Is it possible to receive comfort from that distance? In a way, yes, as least to the second question.

I carry a yearning I cannot bear alone in the dark—

I have a new compilation of Moravian folk songs, set by Leoš Janáček, sung by Martina Janková and Tomaš Král, acccompanied by Ivo Kahánek, and those have led me down the overgrown path to my grandmother’s house, to her life before she came to Canada. I wasn’t playing the cd in the early hours the other night–John and Winter the cat were sleeping upstairs!–but I could hear the songs anyway if that makes sense. They are brisk, stylized, rowdy, tender, as complicated and simple as folk songs can be. And there was deep solace in imagining them, imagining my father’s mother. It was everything I needed. And then my newsfeed brought the terrible story of Christchurch and the massacre of Muslims into my dark room, lit only by a small lamp, and I wondered how our world could ever be healed.

What shall I do with all this heartache?

What will any of us do? I don’t know. It happens. It happens again. And we are somehow helpless. Is there even a “we” anyway? It’s good to see people bring flowers to the sites of terrible violence and it’s good to see them gathered in solidarity at mosques but these are not the people who bomb and shoot and drive their vans into crowds. They’re not the leaders of so-called democratic nations who inspire such violence by their ugly rhetoric (and who, it has be said, are elected by millions of people who share their beliefs).

I don’t know what to do. Poetry makes nothing happen but I read it anyway. Joy Harjo’s beautiful “Speaking Tree”:

I have heard trees talking, long after the sun has gone down:

Imagine what would it be like to dance close together
In this land of water and knowledge. . .

To drink deep what is undrinkable.