For the past week or so, this Pacific treefrog (Hyla regilla, though there’s some debate about this name now and it’s been suggested that these are more properly Pseudacris regilla. It’s a bit like nit-picking* to me. All my field guides call them Hyla regilla!) has been in residence in and around a pot of chives on the deck. In this photograph, it’s on a honeysuckle leaf (pot of chives behind it) and those little holes in the leaf are evidence of sawfly larvae, I think. And there are ants around too. The other day I saw this little frog stick out its tongue and capture an ant which it seemed to relish. 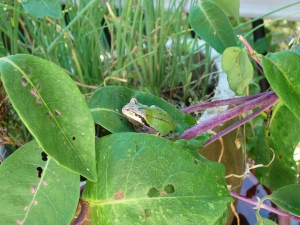 There’s another larger treefrog on the upper deck. And another, the tiny one shown in my post of August 25, as well as one we hear but don’t see in the ferns by the patio. What’s interesting to me right now is their voices. In the spring, you can stand outside at night and all you hear is a huge loud chorus of treefrogs calling to one another in the great mating hullabulloo in the nearby water sources. Such large voices for such tiny creatures! Deep baritones, rich tenors, even the odd mezzo-soprano. Right now, though, the treefrogs close to the house are singing individual arias. It’s not about mating. Wrong season. So what is it about? Yesterday I watered the potted herbs on the deck and as soon as I’d finished, the little frog in the photograph was singing loudly. Was it joy? Irritation? Field guides talk about the “rain song”, the premonition of changing weather. But it’s been lovely here for the past week and we’re promised good weather for the rest of September, and still the treefrogs sing. And who knows, maybe we’re hearing arias from Handel’s Hercules: There in myrtle shades reclined/By streams that thro’ Elysium wind,/In sweetest union we shall prove…”

*i.e., it doesn’t change the essential qualities of the treefrog…

Ever since I saw Giotto’s beautiful ceiling in the Scrovegni Chapel in Padua a few years ago, I’ve wanted something of that beauty in my daily life. To sit under a lapis sky studded with golden stars, angels and Madonnas looking down to bless those below.

Last winter I went to the hardware store with a book about Giotto in hand. The woman at the paint counter helped me match the blue (something called “Electric Storm”) and I brought home enough to paint the ceiling of my small study – it’s perhaps 9 x11, with a big window looking out to a covered porch. Right now the wisteria climbing the porch’s post is in full bloom and I love looking up from my desk to watch hummingbirds at work in the flowers.

The paint sat in the workshop for more than a year. I couldn’t bring myself to begin to paint. So much was happening in my life and there never seemed to be time to drape old sheets over the shelves and furniture and actually bring this particular project to life.

A few weeks ago, I finally applied three coats of “Electric Storm” to the white ceiling of my study. To say that John helped is an understatement. My style is careless and his is meticulous. He followed me, repairing my mistakes.

Then we spent a week or so trying to figure out the best way to paint on the stars. Would we use gold leaf? A stencil? Freehand? At one point, I desperately considered stickers.

I decided on a particular eight-sided star, partly influenced by Giotto and partly by the painted monasteries of Bukovina (you will be able to read about these in my forthcoming book, in a chapter where I try to find traces of my paternal grandfather who came from Bukovina). John cut a careful template and plotted the best way to arrange the pattern on my ceiling. There would be ten stars altogether, in four rows, two of two stars and two of three.

He measured and marked the placement with green painters tape. He held the template and I traced the stars with a white pencil crayon. I waited a day and then mixed some paint from those little containers you can buy in a craft shop – I have many of them for painting flower pots and cloth. (Forrest made me a floor cloth using these, featuring a saint on horseback inspired by the painted monasteries of Bukovina!) I used a matte dark yellow mixed with metallic gold for the first coat and followed that with a second coat of straight metallic gold. I just did the second coat this morning.

So right now I’m sitting at my desk, listening to Lorraine Hunt Lieberson sing “Cease, ruler of the day, to rise” from Handel’s opera Hercules, under a ravishing blue sky lit by stars. It’s not the Scrovegni Chapel with frescoes on the walls narrating the Annunciation, the Passion of Christ, the Resurrection;  but it’s beautiful and the stories surrounding me — pictures drawn by my children, an elk skull, birds nests, our wonderful dog Lily’s pelvis, books that have taught me how to live — amount to a life. My life, under Giotto’s ceiling.