How the tunnels see the Fraser Canyon:

Yale, Saddle Rock, Sailor Bar, Alexandra, Hell’s Gate, Ferrabee, and China Bar, blasted through canyon rock, openings birds swoop into, and out, deer skittish in headlights as they race the long paved stretches, panicked by their knowledge that they are inside the mountains, inside mountains, passages north and south, look down, down at the Yale midden, hollows of old kikulis, remnants of cedar burial wraps, ground dense with salmon vertebrae, and the salmon themselves, 30 pound springs, river red with sockeye, the muscular steelhead heading north, north, past where Old 97 hit the snow-covered rock slide in 1909, Maggie Lloyd on her seat in the bus, face pressed against the window: “The trees retreated, now, from the roadway and the road passed between grassy mounds, rippling flowing, it seemed, out of each other. Above them, the pine trees ascended.”; shadow of brigade trail through the trees, past lilacs and fruit trees near the Alexandra Bridge, the old bridge, injured and dying men on the slopes, the words of Radcliffe Quine still in the air: “I tell you it is a hard road to travel. You have to carry your own blankets and food for over three hundred miles and take to the soft side of the road for your lodgings and at daylight get up and shake the dust off your blankets and cook your own food for the day and take the road again.”: the grave of 14 year old Catherine Patrick, dead of pulmonary tuberculosis in 1938, Lily Clegg on the porch of the Alexandra Lodge with her pipe and sharp eyes, taking a break from the endless housework and cooking, the far-off sound of Simon Fraser on his river below Hells Gate and Ferrabee where the original road had crept along the rocks on wooden trestles: “The water which rolls down this extraordinary passage in tumultuous waves and with great velocity had a frightful appearance; however, it being absolutely impossible to carry the canoes by land, all hands without hesitation embarked upon the mercy of this awful tide”; and the lofty view down from China Bar where “sad and fatal accidents often occur, and horses and their owners are dashed to pieces on the rocks below, or drowned in the deep foaming waters rushing down the narrow defiles from the vast regions of mountain snow melting in the summer heat.”

We drove up the Fraser Canyon this morning on the first day of a little road trip in service to the novella I’m currently at work on. What am I looking for exactly? I always say I have no idea but I’ll know when I find it. The novella is set partly in Lytton in the late 1970s. And in many ways the communities along the Fraser Canyon haven’t changed much. When the Coquihalla Highway opened in 1986, people predicted that the small towns along the length of the TransCanada highway from Hope to Cache Creek would suffer. And they did. Yale, Boston Bar, Lytton, Spences Bridge — places with interesting and vital history, with quirky restaurants and funky auto-courts, with ice-cream stands and old-fashioned service stations. We like to drive this route, particularly this time of year. The river is sinuous, the sage is pungent, fishermen stand in hip-waders in the eddies, hoping for steelhead.

We were hungry at Boston Bar so we stopped at the Old Towne Inn.

A homey interior with some antique stoves and photographs on the walls and big delicious burgers. The room was decorated for Halloween with wispy spider webs and pumpkins and a skeleton or two. And a few old ghosts from my past, Kenny Rogers singing “You picked a fine time to leave me, Lucille”, June Carter and Johnny Cash singing “Jackson” — I was in heaven. And then a green pick-up truck pulled up in front the place and a man began to unload actual ghosts. He placed them carefully in the front patio where people would sit in good weather (it was raining while we were eating our lunch): 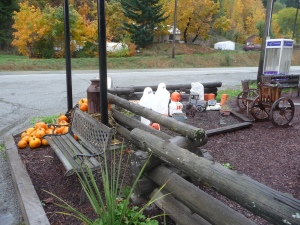 The thing is, the Canyon is haunted. Train whistles, the original Alexandra Bridge visible from the current one, the overgrown remnants of the Cariboo Wagon Road, weathered barns and cabins, the faded signs from the auto-courts of the 1940s and 50s. I said to John, “When you enter the tunnels, you come out to something you never expected.”  There are seven tunnels, all of them taking you through a mountain, so that you feel the weight of millions of years of rock on your chest. You feel the labour of those who created the tunnels, built between 1957 and 1964. And driving through them, you remember the photographs of the original wagon road taking miners and others from Yale to Barkerville:

At Lytton, we crossed the point where the Thompson River enters the Fraser and wound our way along Highway 12, past old ranches and rock slopes so precarious that we recalled a slide over the summer which closed the road to traffic for some days (and now there’s a sign with Big Slide on it, to which a wag has added “Really”), past sumac almost fluorescent in its fall colour — 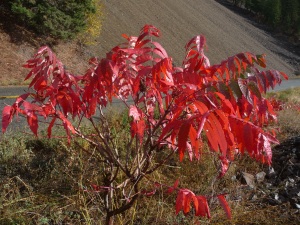 — to Lillooet where we’re staying for the night, a town with its own ghosts –23 Bactrian camels and Ma Murray, fire-jumpers, Dr. Masajiro Miyazaki, Native fishermen and their fish-drying camps…And now Fort Berens Estate Winery with its beautiful tasting room and friendly dogs. We have a case of their award-winning wines in the trunk of our car as I write…