For awhile now, we’ve been watching a pair of chestnut backed chickadees in the nestbox on the arbutus to the south of our house. We built the nestboxes for violet-green swallows — we carefully placed three in various locations around our house — but they don’t seem to use them much, although many years ago they nested regularly in a dilapidated box on one post holding up the fence around the vegetable garden.

The chickadees, though: we do see them taking nest materials into this box some years but we’ve never seen the whole cycle. Maybe something spooked them and they decided against the box. (Now we know there’s a weasel around and maybe that’s the answer to the riddle.)

But this year, we watched them building and then we went away to Ottawa. When we returned, we saw the pair entering the nestbox and leaving, and we realized that they probably had a brood. They’re not shy. All winter I put sunflower seeds out for the birds and the chickadees are bold enough to sit on my wrists as I fill the feeder. They are hauntingly light, the touch of their feet as delicate as anything I’ve ever felt.

This morning John was watching from a window and he said, I think the young are leaving the nest! And they were! 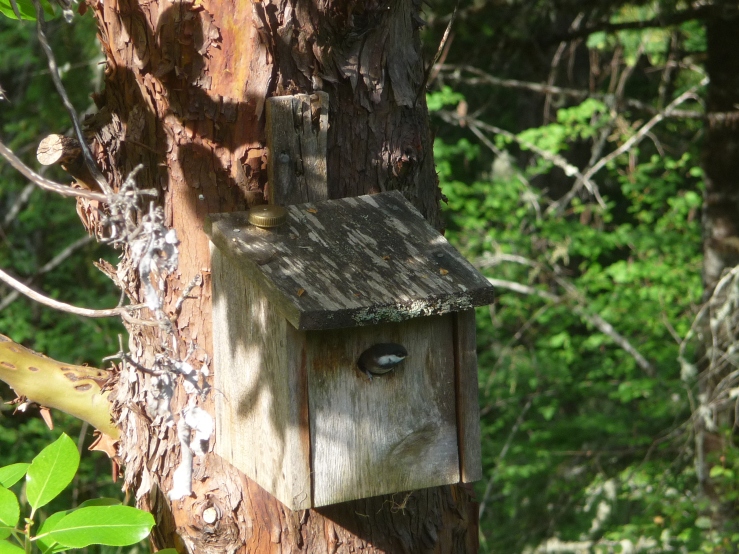 We watched 6 small birds pause in the opening, one after another, while the parents called from the nearby mountain ash. As each one summoned up courage and flew (flew! Imagine doing that for the first time!), the others made encouraging sounds from the ash. I loved seeing a fledgling land for the first time on a tree branch, tentatively and clumsily — those feet! — and then finding its own balance.

Some took a bit longer. A parent would take in a grub to feed the reluctant youngster and then a few minutes later, another chickadee found its wings, found its way to the mountain ash. 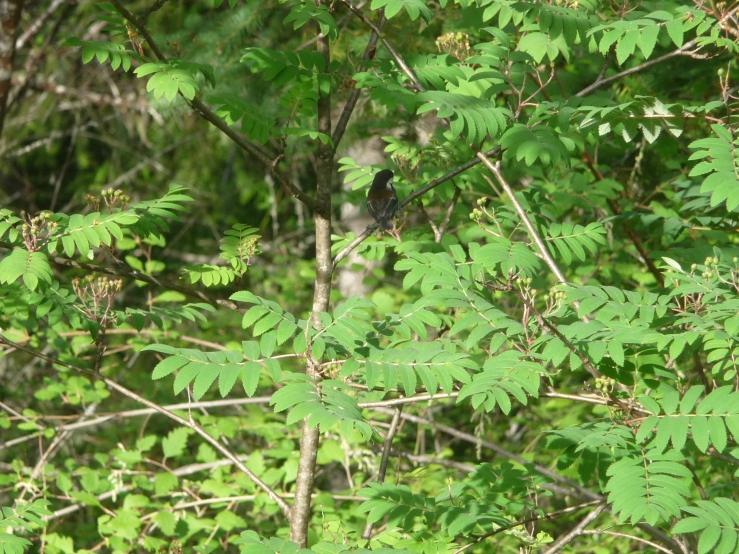 The 7th has just left. And no other face appears at the opening so we think they’ve all fledged. Half an hour, and a whole family learns to fly. What an amazing way to spend half an hour on a sunny morning, the very last day of May. Of course I am reminded of my own beautiful family, all fledged, all nesting far away. I wrote about this in Mnemonic: A Book of Trees, in a chapter about building our house and building the nestboxes:

How time passes, how everything we knew is stored in our own bodies — the dull ache of sleepless nights, the sharp yearning for love, the sorrow of these empty rooms once filled with children laughing, fighting; their books, their toys, their filthy socks, and tiny overalls. One boy still sits under the original nest box (though I know it’s not possible, he lives in Ottawa) with his notebook, trying to sketch the swallow nestling that hangs out the opening, saying, Don’t fall out, Parva! Be careful. And I stand out among the trees, under stars, while the moon thins and fattens, turns soft gold in autumn, hangs from the night’s velvet in February, draws me out on summer evenings to drink a glass of wine while owls fill the darkness with that question: Who cooks for you, who cooks for you-all? It was always me and I never once minded.