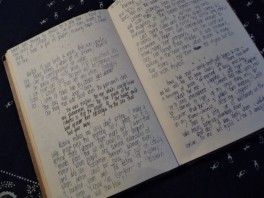 A dear friend in Toronto sent John some books and they arrived yesterday. One of them is Louise Gluck’s Faithful and Virtuous Night. I picked it up this morning and opened to “Cornwall”:

I was renting, at the time, a house in the country.
Fields and mountains had replaced tall buildings.
Fields, cows, sunsets over the damp meadow.
Night and day distinguished by rotating birdcalls,
the busy murmurs and rustlings merged into
something akin to silence.

I sat. I walked about. When night came,
I went indoors. I cooked modest dinners for myself
by the light of candles.
Evenings, when I could, I wrote in my journal.

Maybe this was the poem that led to me opening a drawer where I keep some of my old journals from times in my life when I’ve kept them. The 8 months I spent in Europe, mostly on Crete, but with two months in London. The year in the west of Ireland on a tiny island off the Connemara coast. I’ve written of the time in Ireland in a novella, Inishbream, and reading my journal reminds me of what was left out. Nettles. Endless nettles (and mussels) because I was so poor I could hardly afford to buy food. But the rhythm of the days and nights was (to me) memorable. Yes, I cooked on dark evenings by candlelight because there was no electricity and the single gas lamp in my cottage was unreliable. There were cows, a damp meadow where a donkey also lived, and he would hang his head over the stone wall, watching for me to come out to pet him. The birdcalls took time to learn. There were corncrakes who rasped in the tall grass, wagtails, rooks, once a snow bunting, gannets, osprey, an owl call from time to time (and maybe it was a short-eared owl because others saw them; I only heard something in my eaves, rustling and creaking), and everything was modulated by the sound of the sea just below my bedroom window.

One day I think I might transcribe my journal. There’s something in it that reminds me of a life lived simply and quietly, with loneliness, and with joy. Occasionally I tried to make little sketches but my drawing skills were so limited (still are!) that I quickly realized it would be better to sketch with words, with phrases, descriptions, and a log of the books I was reading. Once I set up a board with canvas clipped to it and used the paints given me by a friend to see if I might capture my house. I was standing by the stone fence haunted by that donkey and my neighbour Peter came up to see what I was doing. He didn’t think much of the results. I gave the painting to my father for his birthday and he framed it. I have it now, hung in the bathroom, and so I see it often, the green rustling elephant ears planted in front, and the hills on the mainland visible. Peter was right and he was wrong. It isn’t the house as it was but it’s as I remember it, if that doesn’t sound paradoxical.

I shut my book.
It was all behind me, all in the past.

Ahead, as I have said, was silence.

There was never silence on the island. Always the ocean, the donkeys, the cows groaning on the lane as they were herded from one tiny field to another, a fiddle when the wind was right, a tin whistle quavering across the rocks, and the owls in the night. 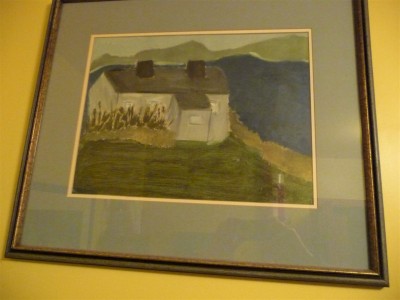