At 2 a.m., I was awake and thinking about the essay I thought I’d finished last night. I’d worked on it yesterday morning, then had to go down the coast to do errands, but as soon as I got home, I was back at my desk. I thought I had it and I went to bed with that deep satisfaction that comes when you complete something. Until I woke in the wee hours with the sense that there was still more to do. So I came downstairs, feeling my way in the dark, and switched on my small desk lamp that always makes me feel that I am in the best place in the world: my own room with its deep rose walls and Giotto ceiling, my books and papers all around me (some would say in disarray but mostly I know where everything is). I heard owls. The cat was delighted to find me awake.

Sometimes I feel constrained by form. I think of the essay in a particular way and I think I am writing that kind of essay. An argument, an anecdote, a piece of non-fiction (a term I dislike, esp. when paired with “creative”), a reflective narrative (on occasion), a memoir-ish construction, a series of questions and answers. A beginning, an ending. I’ve written versions of this essay and I know I will write other versions in the future. But the essay I’ve been working on is something else. It’s both objective and subjective. The passages based on memory or history are reconstructed and might not be objectively true. The passages based on human physiology are imaginary voyages into my own body. Its geography is dependent upon maps that might not be accurate in the Cartesian sense but I think the heart would approve. (Mine does. At least it does this morning.)

In the small hours, I realized that I had to push the actual physical structure more than I had by simply deciding to move some of the sections to a right-handed margin. Yes, I was pleased with how this worked but I wanted less reliance on river banks and dams and more flooding. So that’s what I did. I sat with my paper draft and tried to see how I could use the space to make my language advance its imagery and its innuendos. The final draft (or final until this morning) is nearly 7000 words and there is a structure, yes, but it’s not the kind I usually employ. There are connections across time and space. You’ll notice them if you give up the expectation that one thing leads to another in a straightforward pattern. Here’s a short passage from section 14.

Coldwater, and the Kispiox where my children waded on a hot day in July, the Leech and Jordan, the Nitinat and Koksilah, the Oyster and Nimpkish, the Po and Arno and the sweet Hoh and Queets and Ozette where I camped as a young woman, the Snake, the Escalante and Kanab, the Lost and the Warm and the Coeur d’Alene,

the Kern, the Mad, Klamath and Rowdy Creek,

the Lost, the Elk,

and the one I walk to season after season, near my home, where coho salmon swim in by starlight

and mergansers wait to feed on their eggs.

And if I sound excited, it’s because I am. Every time I finish something, I wonder if I’ve written everything I have to write. Maybe that’s it. And then I write something else. I’m kind of looking at my clutter (it’s an organized clutter. Maybe.) and wondering what I might find if I move things around.

Oh, and I still don’t have a title.

I am currently at work on an essay about rivers and blood clots. An odd combination, I know, but I seem to have a clotting disorder (I’m waiting to see a hematologist for further tests) and it’s made me think a little more seriously about how our venous system works. How everything flows normally and then doesn’t. And of course that led me to think about rivers, the ones I love and return to, and how they change too for reasons that have some similarities to what happens with our veins. So it’s very absorbing, this essay, and I woke this morning with that kind of excitement I’ve always felt as I enter the deep waters of writing. It’s leading me to the north, to the MacKenzie River, where we were lucky enough to spend a few days in Fort Simpson at break-up, and to Englishman River, where I camped as a child and then as a young woman in desperate straits, and this morning to the Rosebud River as we drove it two springs ago very early and stopped at the aqua bridge between Wayne and Rosedale to listen to magpies. And in my mind is how to keep the various strands winding around each other, as the channels of braided rivers split and rejoin, as banks erode and are changed over years or centuries.

A deep cramping pain. Some swelling. In the Emergency room, my history is taken. Pulmonary embolism a year ago. Suspected deep vein thrombosis. 6 months of blood thinners. Many scans and tests.

A lab technician is called from his bed to take my blood for a d-dimer test to determine if there is active clot activity. An ultrasound is set for the next morning, though it is well into that morning when the technician draws blood from the pool of my right arm. I do not wait for the results because I want some sleep and the person in the other bed is on a powerful narcotic that makes her itchy, causes her to moan on her side of the screen that separates us. The medical staff is not happy I’m leaving.

We drive home on a dark highway. It’s a 45 minute journey and after 30 minutes the Emergency room physician phones me on my husband’s cell phone. In the car, the loud opening chords of “Sultans of Swing”, a moment when I regret he didn’t set his ring tone to something sweet—the Brahms lullaby or “That Sheep May Safely Graze”—as I struggle to stab in the right place to answer it. The physician tells me that my d-dimer test is positive for blood clotting, that I may have a DVT, and that I must return immediately to begin a course of anticoagulants.

“As I’ll be coming in later in the morning for an ultrasound, I can’t just wait until then?”

“No, I must insist you come back now.”

So we turn around and head back, my husband silent with weariness. He won’t let me drive. About halfway to the hospital, we see a large animal on the side of the highway. Not large like elk, which we see quite often. And not a coyote. Bigger than that. It takes a moment or two, and the glare of the animal’s golden eyes, for us to realize we’re seeing a cougar. I’ve lived on this peninsula for 35 years and I’ve seen just two cougars in that time. I’ve heard two more, I think, but sightings are rare.

All down the coast, we passed creeks in the darkness, Homesite, Meyer, Anderson, Maple, Haskins, scribbling down the mountains. And I would do it all again, sit at the desk with a nurse taking my pulse, my blood pressure, arranging for bloodwork, ultrasound, medication to prevent a blood clot moving up into my lungs, for the glow of the cougar’s eyes in our headlights, and the knowledge of water finding its way to the sea.

When I woke this morning, I wanted to go outside right away to unwrap the last shibori piece. But it wasn’t yet light! So I made the fire, fed the cat, ground coffee beans—a more seemly order to the day’s beginning?

And as I was doing those things, I realized that the piece would not look as I envisioned it would. I think the arashi technique is best suited to either a smaller length of fabric (I used a linen sheet, single-bed sized…) or else a long pole or pipe so that the most surface area possible is exposed to both the indigo dye and the process of oxidization. A further thing, I realized, is that the area where I’d drawn and then waxed salmon (a form of resist pattern) would be the area receiving the least exposure to the dye. So pale fish on a pale ground (or water). Maybe I was preparing myself for disappointment. But I also knew, know, that mistakes and errors and (let’s face it) lack of artistic skill and experience often make for beautiful results. 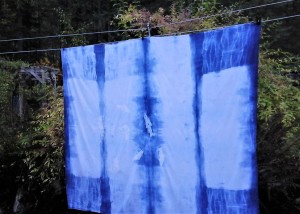 And yes, I think the result is beautiful. Or will be, once the sheet is dry and I can remove the wax and then wash the piece. I’d intended to detail the fish with fabric paints in any case and then to embellish them with shell buttons.

I think of these projects like essays, in a way. When I begin an essay, I have ideas in mind, images, even particular sentence rhythms, but I don’t have an outcome that I’m working towards. I want to find things out, I want to try, to attempt, to weigh, all those old notions associated with the essay form. There are variables, stray plants encountered along the way, passages of poetry that somehow seem relevant, maybe a memory of a meal, someone singing, a rise of hill punctuated by umbrella pines seen from a train going between Avignon and Arles, and whoosh, there’s the essay. Or the first draft anyway. And these essays in blue cotton and linen? First drafts too, because now the work of finding out how to improve them, to make use of them in a practical way (as quilts, as clothing even), now that work begins.

All weekend I’ve spent my time immersing my (rubber-gloved) hands in pans of indigo dye while around me the bigleaf maples filled the woods with the most limpid yellow light. I remembered doing a batch of dyeing last summer and how the morning that I came out to cut the threads and roll out the lengths of fabric was the same morning a family of pileated woodpeckers was loud in the trees just beyond my bench. The parents were teaching the young ones to feed and the offspring kept flopping clumsily on the trunks of the big firs and squawking piteously. As I snipped and unwrapped, I wondered if they’d notice me and fly away but no. So the memory of that morning is in the cushion covers I made with the itajime fabric, the sound of woodpeckers imprinted in the process. 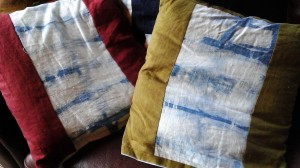