I’ve been thinking about how we remember — details, stories, the intricate branchwork of family trees.  We gather materials and try to put them into a semblance of  what we imagine the whole complex structure to be. And yet there’s so much we’ll never know.

The other day we stopped by Whipsaw Creek where our friend Liz remembered collecting fossils with her children many years ago.  I’d seen fossils of Eosalmo driftwoodensis, a genus of extinct salmon found in various locations, including the Princeton area. The fossils in the Princeton chert are from the Eocene period, dating back 56-33 millions years. The little museum in Princeton has a good collection but this time we were going to look for our own and I had my heart set on a fish.

Alas. But I was so glad to find this, a tiny bit of flora from the past contained in a piece of rock. (Look at the upper edge of the rock. I tried to get the clearest image possible but I don’t have a camera designed for this kind of photography.)

I don’t know what kind of leaf it is.  Other finds in the area include dawn redwoods, ginkgos, the samara and leaves of elms, birches, ferns, and conifers. But to hold this in my hand, something millions of years old, and to think of its origins in that place…How much is contained in such a small remnant of the past.

When you pay attention, the past is everywhere. It might be the immediate past, like this skin discarded by a garter snake sometime in the last few days (and discovered this morning as I watered the rhododendron it was lying under): 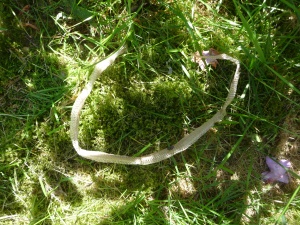 Or this ranch on the Bridesville-Rock Creek Road, about as eloquent as a homestead could possibly be, with its lilacs and bluebirds and weathered boards, the song of the yellow-headed blackbirds in the marsh behind me as I took this shot:

I study these and try to piece together their stories — a ginkgo leaf, maybe, at the dawn of time, a snake easing itself out of an old skin, its new one bright and tender underneath, or a ranch in its bowl of sunlight, remembering the generations who cut the hay and tended the cattle.