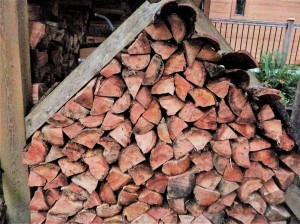 An hour ago, while swimming, I caught a thread of autumn in the morning air. That slightly winey scent of leaves, a riffle of cool breeze unheard of a week ago when there was sun on the sand at 8:30. Maybe I noticed it because earlier I’d been reading the Autumn section of Bruce Hutchison’s A Life in the Country with my first cup of coffee. I’ve always loved his books and I found this copy at the Friends of the Sechelt Library book sale a few weeks ago. 2 bucks. It’s an elegant memoir of the author’s home-building in North Quadra near Victoria (the same neighbourhood my parents lived in), garden-making, renovations at the cabin he owned at Shawnigan Lake. He wrote so elegantly and beautifully of the dailiness of keeping a place intact, of welcoming visitors, of the strange and wonderful cast of characters who peopled his world. But back to Autumn. His meditations on the woodshed rang a familiar bell.

….If, occasionally, our politicians turned from rhetoric to reality and grasped an axe instead of a debating point or photo opportunity much social damage might be avoided.
For those who can read its message, the woodshed rebukes such errors. Neatly piled (a high skill in itself), the contents, unlike all paper assets and printed money, are real wealth, an honest measure of value never diminished by the legal counterfeiting known as inflation. And when the chopper inspects the drying wood for next spring’s fire, he must be a little surprised by his own morality. His work, his sweat, his muscle and ache have created that wealth, or at least preserved it. He has asked no wages and he has toiled while his guests revelled in summer idleness.
There is a darker side to the lesson of the woodshed. A moral chopper should ask himself what right he has to nature’s generosity when multitudes of human beings are cold in winter and hungry in all seasons. A nice question, especially for Canadians who, possessing a transcontinental treasure, grossly mismanage it by defying the woodshed principle.
The moral question remains, and it has baffled philosophers of every faith since mankind left its caves—how much of nature’s yield does any nation or individual deserve? What volume of wealth are we entitled to hoard for our own use in woodshed or written contract?

We burn a lot of wood over the fall, winter, and spring. We buy some now that we’re past middle age and we cut what we can on our own land. We’re eyeing the dead young cedars, victims of two years of hot dry summers, and once it’s safe to take a saw into the woods, we’ll spend some time taking down what we can. When our older son visits in October, he may be conscripted for some woodcutting too. It’s good work, if hard on the muscles. But it also makes you grateful for a warm fire made with logs you’ve cut, split, and stacked yourself. Last year, in November, we had a load of dry pitchy fir delivered to supplement what we’d brought in ourselves. And the delivery coincided with two things: an emergency surgical procedure for John; and the visit of our Edmonton family. While he convalesced, I stacked wood in the shed; and Cristen, Kelly, and Henry filled the woodbox and kindling bucket in the porch as needed. Mostly John does these jobs and it was good for the rest of us to take them on, to know the luxury of a fire afterwards.
Yesterday was the first day of the Pender Harbour Chamber Music Festival. I’ve been involved since the beginning season, 14 years ago, with a break of a couple of years in the middle. It’s always a fabulous weekend of intimate chamber music in the most beautiful setting—a restored Forestry building on a little hill above the harbour, surrounded by big trees. The opening event was this year’s Rising Tide, our annual celebration of young performers; the concert is a gift to the community. We were treated to a programme ranging from John Dowland to Leonard Bernstein. It was during the duet “Make Our Garden Grow”, from Bernstein’s operetta Candide, that I reached for my husband’s hand and squeezed it. It was our life, in a way, in the way that music can reach into your heart, play it as deftly as any instrument, in the words of Richard Wilbur, the poet who wrote the lyric for this particular version of the libretto: