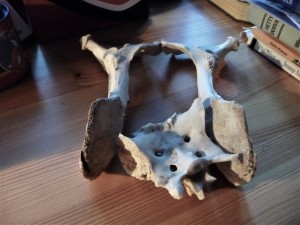 Something happened the other day and I want to write about it while it’s still fresh and lively in my thinking. I got up in the night (after midnight as Wednesday eased into Thursday) to sit at my desk and ponder the beginnings of an essay to accompany the dark path quilt I was sewing. I know this might not make sense to people who do one of these things or the other but not both. Each discipline requires a different set of skills, a different kind of focus. Still, working on the two things in tandem has become a way for me to explore the process of making something and thinking deeply about the way it connects to ideas, dreams, visual signals, metaphors. My essay “Euclid’s Orchard” traced the making of a quilt of the same name. It followed my attempts to learn something of mathematical language and pattern in order to understand my son Brendan and his life-long calling. (He is a professor of mathematics at the University of Alberta and when I look back at his childhood, I see that he was always pursuing patterns and numbers. Though when I asked him once if he always thought about numbers as a child, he said, “That’s the way you’d describe it but it was more about relationships, patterns, equations.” “Even then?” “Yes, even then.”) Another essay, “An Autobiography of Stars”, documents the making of a starry quilt for my daughter who was still a teenager. I wanted to give her the heavens and all they contained. Not all my essays have matching quilts but they almost have some sort of puzzle at their heart. Something I need to figure out.

So as Wednesday became Thursday, I was at my desk, the space lit by a small lamp, and I was looking at the beginning of the dark path essay. To the right of my computer is the pelvis of a long-dead dog. While I was sitting there, I remembered something that happened to me when I was 14, an accident with my horse. I heard (if you can believe me) the voices of the two soldiers in the opening scene of Hamlet:

Francisco: Nay, answer me. Stand and unfold yourself.

I shivered a little in the night, in the small space of my study under its Giotto ceiling, and I began to write. An hour later, maybe two, I went back to bed. Then in the morning I returned to my desk and finished what turned out to be a complicated and (to me) fascinating nexus.

What I wrote wasn’t what I thought I’d write. When I began the essay to accompany the quilt, I imagined it would describe the process of choosing scraps of fabric and laying them out in a pleasing pattern. Yes, there’s some of that in the essay. I thought I’d describe how much John and I are enjoying reading the Inferno of Dante each evening by the fire. Yup, that too. But I also found myself drawing together pelvises, fractures, the fear of losing myself in the process of aging, various paths I’ve made and taken in my life so far, and oh, some other strands of loose thread into a crooked but interesting seam. It took me almost all of Thursday to finish the first draft and a good part of Friday (yesterday) to fix some weak areas and to tighten the structure. (Those seams! The connective tissue!)

Sometimes you just have to write. You can’t wait for the right moment because when exactly will that be? You need to pay attention to your own fears (Who’s there?) and walk into the night to meet them. You hope the path you’re following is not too broken and rough. You hope your footing is at least adequate, in the darkness, in the grass that has grown up over the path you made with rocks to lead you out to the outhouse when you first lived here, your baby (not the mathematician but the one who became a historian) sleeping in the unfinished house.

Like so many others, I find January a long month. A dark month. And although we are not in the middle of the polar vortex that is creating such frigid temperatures in other parts of the continent, it’s cold here. In the mornings I put on two or three layers and drink my coffee close to the fire.

But then there’s a morning when it’s somehow lighter. I woke at 5 a.m. on Monday and the sky was dense with stars against the deepest indigo. I thought, oh, that would make a beautiful quilt and then I realized I’d made several inspired by winter skies. In my book Phantom Limb, there’s an essay called “An Autobiography of Stars” in which I detail the making of a quilt for my daughter Angelica, set against a meditation on astronomy and the Leonid showers.

On each bed, a patchwork, for warmth and for safe passage through the night. In the sky we might fashion a parallel life, a world mirroring the topography of our own lives, irregular and beautiful, geometry in service to love. Sewing stars for my daughter to sleep under, I am fashioning a metaphor for my love of her and a belief in her luminosity, a parable of meteors and radiance and grace.

I have no photograph of that quilt to share but it was silvery stars—Variable Star blocks—on a ground of deep purple and blue. And I’m pretty sure I was making it in winter.

So a morning when it’s lighter, when you walk across the patio and realize that the winter jasmine has begun to bloom, single yellow stars in a thicket of branches:

A morning when you are looking forward to reading more of Dante’s Inferno by the fire. Last night we read the 4th Canto, the long beautiful lines taking us into the first circle of hell with Dante and Virgil. And in that place too is a bright fire with poets gathered—Homer, Horace, Lucan, and Ovid. More company appears, every poet or philosopher or mathematician important to Dante. In the poem’s notes, written by Robert Pinsky’s daughter Nicole, she calls this “an abundant, almost ecstatic identifying list.” Dante and Virgil spend some time with them and then

…my wise guide leads me away from that quiet
Another way—again I see air tremble,

And come to a part that has no light inside it.

Tonight we’ll go there, into the second circle. But even in that darkness, there will be beauty. I remembered in 2013, in the aftermath of having to take the vegetable garden apart for a septic field repair and then rebuilding it again, digging in a new border and finding, underground, unexpected beauty. When I’d dug up all the plants and trees a few months earlier, I thought I’d also lifted all the bulbs to set aside and replant again. But there, in the dark, an incandescent clump of crocus.