he said, as we walked back to the car after our swim. We’d come to the lake just before 8 and already a guy was set up in one of the more private areas, with a shade cabana, a portable changing hut, a table, half a dozen chairs, 3 coolers, blankets spread out on the sand, and while we swam, another man brought 4 more loads of stuff to add to it, pulling a wagon from the parking area to the beach. 2 boys who might have been 8 were seated on the chairs, heads bent to their devices. The eagle who passes most mornings flew low this morning and the cabal of crows muttered in the cedars above the little settlement. But the boys didn’t look up.

John first saw this lake in the early 1970s, having arrived on a motorcycle late at night to camp on a bluff with his girlfriend. Waking, they saw the lake below them.

I first saw it in the sixties,
driving a Volkswagen camper
with a fierce gay poet and a
lovely but dangerous girl with a husky voice

I want the 70s back. We never bothered with bathing suits here, he said, and if we did, whoever you were with held a towel and you changed behind it. You sat on the hummocks of grass. You had a towel, maybe a bottle of beer in your bag. You swam. You stretched out under the hardhack and dozed in the sunlight.

And again, in the seventies, back from
Montana, I recklessly pulled off the highway
took a dirt track onto the flats,
got stuck—scared the kids—slept the night,
and the next day sucked free and went on.

In the mid-1970s, I slept on the beach in the photograph, a little to the left of the falls. If I was staying for longer than a day or two, I showered under the water you see falling to the beach. There were fossils in the sandstone under the shelf where the creek tumbles over. Sometimes I brought my dad’s little blue Primus stove: 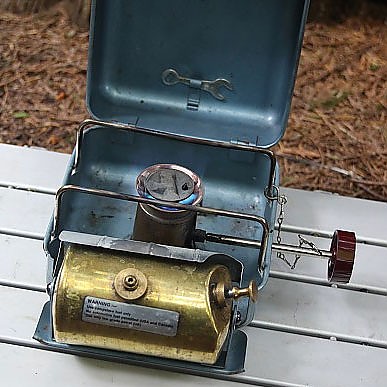 I could make myself coffee in the morning or heat soup at night if the evening was cool. I spread out my sleeping bag behind some logs at the high-tide line and I swear those were the best sleeps of my life, the sound of the surf close enough to enter my dreams. Those days and nights on the beach helped me to survive the heartbreaks of my young womanhood, the difficult years when I wasn’t sure how to live. I’d lean against the logs and make the lines of poetry that became my first book. In gratitude for the place and its solace, I wrote a novella, Winter Wren.

Fifteen years passed. In the eighties
With my lover I went where the roads end.
Walked the hills for a day,
looked out where it all drops away,
discovered a path

I want the 70s back, he said, as we passed the man pulling the wagon of every possible thing needed (or not needed) for a few hours at a beautiful lake, the little boys on their chairs peering into the tiny screens of their phones.

Note: the lines of poetry are Gary Snyder’s, from “Finding the Space in the Heart”