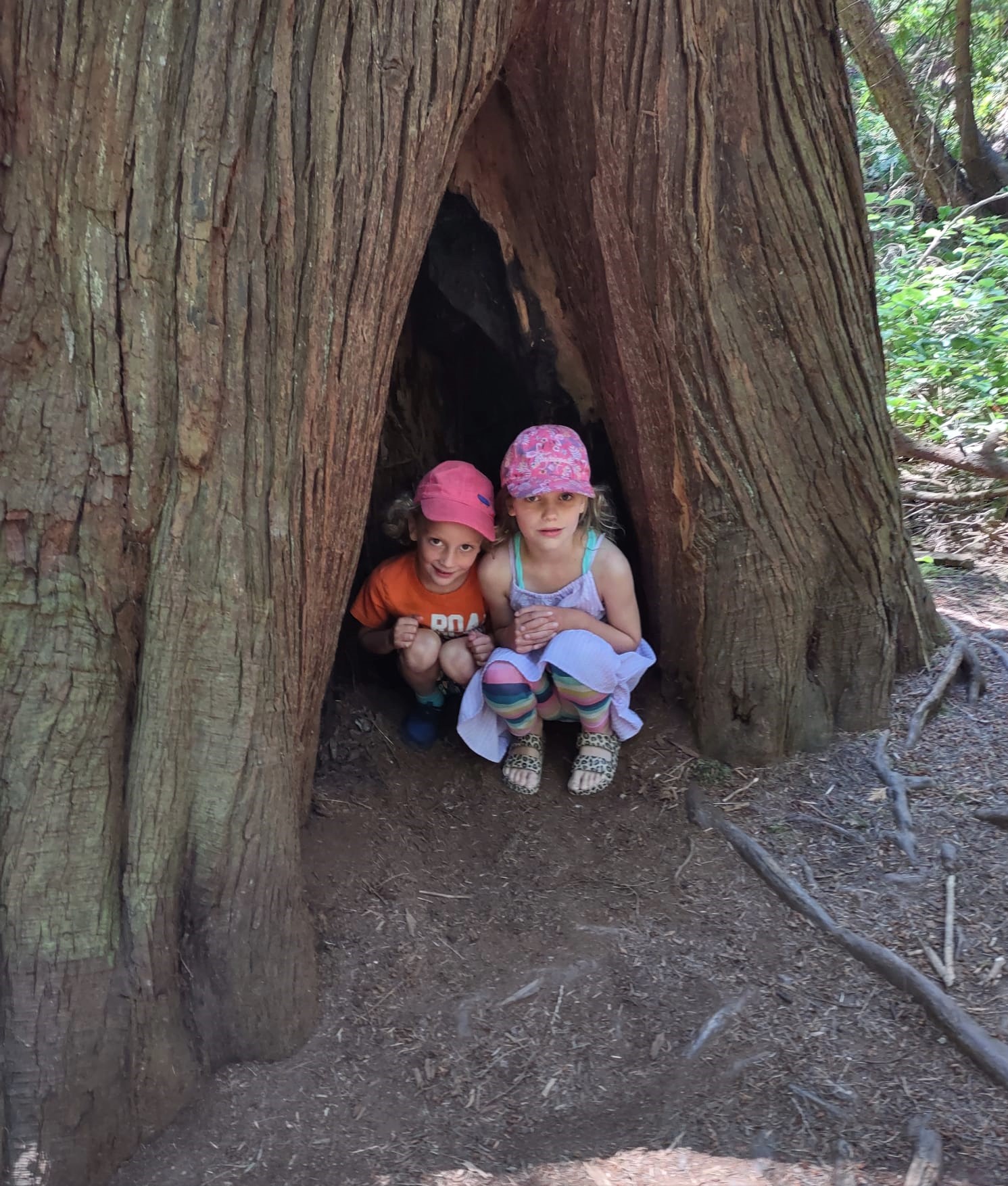 Yesterday we walked to Francis Point’s Middle Bay and the kids explored the beach. Their parents are away for a couple of days and Grandpa John and I have been enjoying their company. They come to the lake and play in the sand while I have my early swim. H. has a loon whistle from the Egmont Museum and this morning he brought it with him to the lake. Was it coincidence or was it him making it warble on the shore that brought the sound of loons to us in the beautiful morning air? A loon family appeared several times in the past few weeks but not for a few days. On yesterday’s walk, the children tucked themselves into the hollow tree, the same tree that sheltered their Ottawa cousins in February.

For lunch I made pesto with our beautiful basil and we had it tossed with pappardelle. They sat at the little table by the mason bee house and ate two bowlsfull each. The other day they saw a lizard on the upper deck and K. watched it climb the exterior wall of the sunroom. They wondered if the big birds floating overhead on thermals were vultures or eagles.

Sometimes it’s very noisy in the house that is quiet almost all year long. Sometimes I can’t answer the questions, particularly the ones about hockey or football posed to me by H. What’s my favourite team? (Don’t have one.) Whose my favourite player? (Ditto.) But then I remembered when we were in Edmonton in early December, watching the kids on the little local rink, H. racing around with a hockey stick, turning corners on his ankles, and how he confided in me then that he was good enough for the NHL. “I wouldn’t be the best player, not yet, but I could do it,” he said confidently. (He is 5.) He says everything confidently. Last night he said not to turn out the bedside light because he was going to be awake for ages, thinking, and when I went in about 10 minutes later, he was fast asleep in his dinosaur pyjamas. What was he dreaming that made him smile in his sleep? We’d read a story about knights and courageous tasks and maybe he was among them in his dream. K. was wrapped in the pale blue quilt with chintz squares and her curly hair was spread over her pillow. By her side, the book she’d been reading: Little House in the Big Woods. In our big woods, owls call, a deer stepped out so the children could watch it walk across the grass, elegant and heraldic, and the days are accumulating, one and one and one.

4 thoughts on “the days”