Note: this post is 2 years old. We didn’t know how the years would unfold and if we had, would we have done things differently? (I think I would still bake cinnamon buns even if it was the last day of the world.) 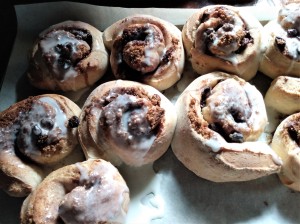 This morning I was drinking my coffee in bed, window open, when I smelled cedar smoke. No surprise. John made a fire when he went downstairs and the smoke rising from the chimney found my window, encouraged by a very light breeze. It’s one of my favourite smells. I’m reminded of warmth (remembering the old adage about firewood, that you are warmed 3 times: by cutting it, splitting it, and burning it), of winter mornings when my children would eat their breakfasts by the fire before heading off to the school bus, of our relative comfort here in our isolated house.

Because I was thinking of comfort, I decided to make cinnamon buns. I had sour milk to use up and although my yeast supply is running a little low, I have baked enough over the past 40 years to know that one can use less yeast if one is willing to wait.

While the dough was rising on the slate hearth, I did other things. I’m tweaking an essay collection in hope of finding a publisher for it, I’m coddling along seedlings in my sunroom, waiting for the right time to plant them out, and they need daily water, I’m also finding my way into new work, and this means lots of reading. What am I reading? Anything I can find about the Spanish flu epidemic of 1918. I was going to write about this anyway because of family losses but the timing? It gives me shivers to think of the correspondences between the past and now. While I waited for the dough to rise, I did my tasks.

Yesterday I read a remarkable essay by the remarkable Rebecca Solnit: “On Letting Go of Certainty In a Story That Never Ends”. Sometimes the right thing comes along at exactly the right moment. The moment when you are feeling sad or impatient or fearful of what the future might bring. You remember your children coming up from the school bus at the end of the day and you’d made cinnamon buns for them as an after-school snack. The fire was warm and suddenly the house was loud with their voices. The house is not loud now. There is still cedar smoke and the cinnamon buns are out of the oven, glazed and delicious. I don’t know when I’ll see the people I love most again. You don’t either. None of us knows. But as Rebecca Solnit says, the waiting is our task now. She writes of the sturdy durability of stories during this time of uncertainty, particularly the stories in which difficult tasks are performed by old women, sisters, young orphans, abandoned children, and an assortment of small but courageous animals.

Those tasks and ordeals and quests mirror the difficulty of the task of becoming faced by the young in real life and the powers that most of us have, alliance, persistence, resistance, innovation.

A series of text messages back and forth from my children in response to the picture I sent them of the cinnamon buns fresh from the oven. I wish you were here, I told them, and they wrote back to say, We never got icing on the buns when we were little! Or, You always left raisins out of some of them, remember? (because at least two thought of raisins as a punishment, one of them reminded me, not a treat…). Memory is selective. What I remember as pleasure is someone else’s annoyance. Or disappointment. But it’s what we need, I think, to help us keep to the task at hand, which is waiting.

We are in the middle and the end is not in sight. We are waiting, which is among most people’s least favorite thing to do, when it means noticing that you have taken up residence in not knowing. We are in terra incognita, which is where we always are anyway, but usually we have a milder case of it…

This unknown place where we find ourselves is also full of reminders of what we’ve always cherished. We need to remember. We need to keep some things sacred even as the yeast runs out, the numbers rise, the rumours of new waves of infections begin to unsettle us again. Remember how we laughed and argued and how a pan of cinnamon buns disappeared just like that as we crowded around the fire and the cedar burned, sending its incense to the sky like a wish.