I went out to plant the last two rows of garlic. The air was clean with rain but there was a faint musky scent as I tucked in the garlic cloves, raked soil over the trenches lined with alfalfa pellets. A faint smell I half recognized. I wrote the cultivar on the wooden stick, Red Russian, and then I stood up. I was mentally tallying the varieties I’ve planted this year — Red Russian, Metechi, Siberian, Duganski, Bogatyr–and then I looked to my left. 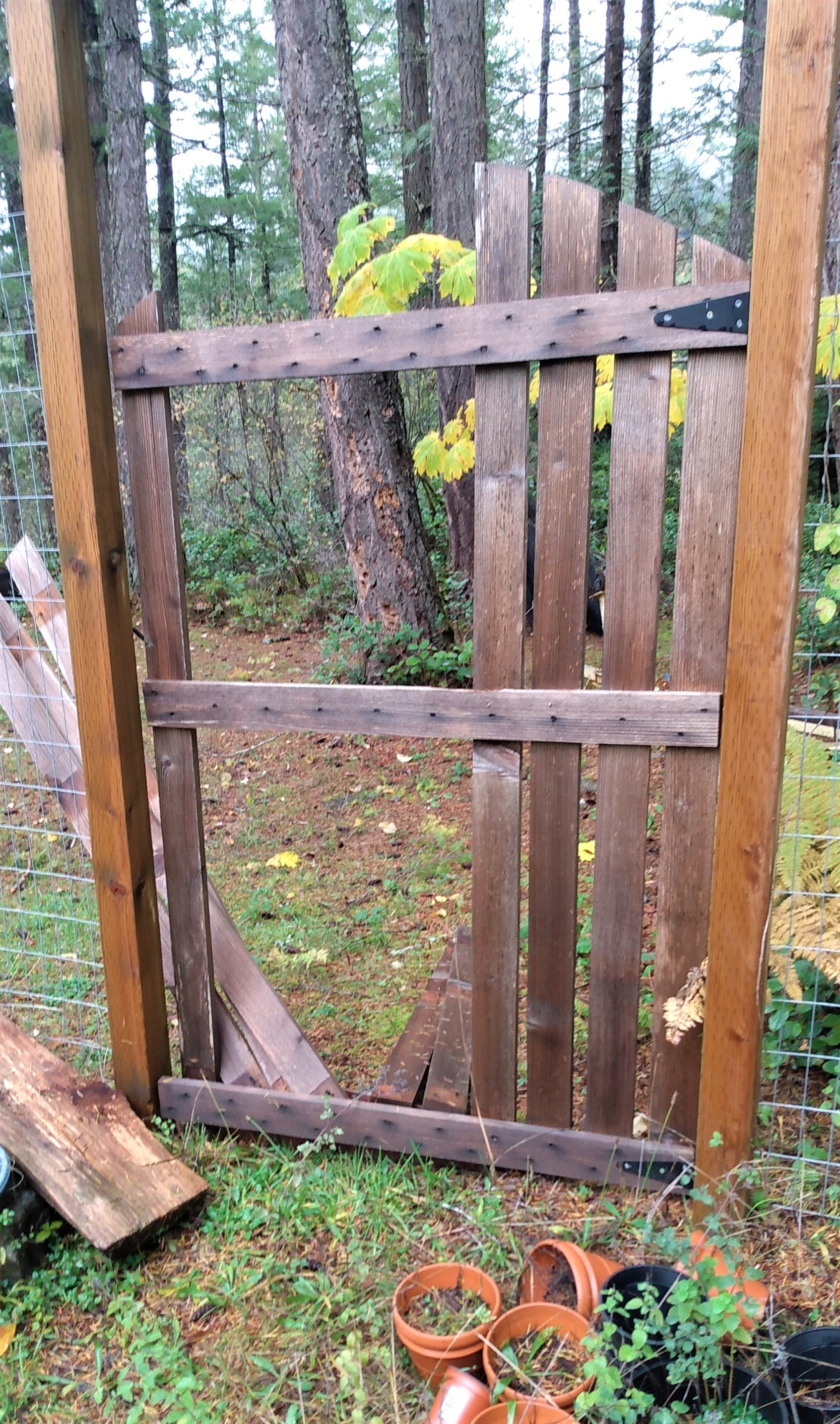 So that’s what the smell was, the lingering odour of the bear who busted the gate to get into the garden. Last night, while we were sleeping, arriving in moonlight to see what it could see. The bear raked off the boards with its claws and clambered through the opening. It didn’t touch the cabbages, waiting for a frost to sweeten them, or the broccoli plants, or anything else that I could see. A look around, then out again the way it had come in.

Our wooded acres are definitely part of the home range of several generations of bears who come every year, predictable as moonrise, as sunset, as seasonal change. In spring we see them mostly up the mountain behind us, have encountered them on the trail as they knock over big rocks for the succulent insects beneath. Their scats are green with new grass. In summer, they are mostly passing through, a mother with cubs, who will remember the terrain their mother shows them and who will return in later years with cubs of their own. And the scats will be darker, flecked with the seeds of early ripening huckleberries and salmonberries. Paying attention to what the bears are eating is a good strategy for knowing where they are.

To conserve energy, black bears seek out concentrated food sourcessuch as spawning fish and dense berry patches, animportant thing to remember when you are in thebackcountry. The habitats they use are as varied as thefood they eat – forests, wetlands, subalpine meadows,avalanche chutes, riparian habitats, and beaches.

The concentrated food sources might also be the grape vines hanging over a summer table, a crabapple tree brought by a grandmother 40 years ago,

pots of tomatoes under the eaves on a second storey deck. A few weeks ago I was reading in bed and I heard bumping on the deck off my bedroom. Turning on the outside lights, I was just in time to see one of this year’s cubs hightailing it down the stairs where its mum was no doubt waiting. I think it had come for the R. canina hips right by my window, the same ones the squirrels and raccoons have been feasting on.

Another interesting habit of bears is the way theymake and use trails. Often they will step in the samefootprints of other bears, thus creating well-wornpaths that they use year after year. Footprints, scats,rubbing trees, and ripped-up logs are all signs ofblack bears.

We’re on their map and they’re on ours, making use of the same trails, their footprints, ours, imprinted in the earth.

*the quoted passages are from https://www.env.gov.bc.ca/wld/documents/blackbear.pdf