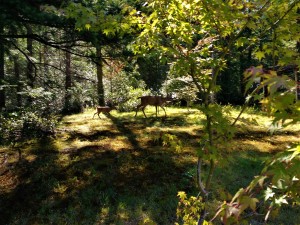 Inside, near the fire, waiting for it to be warm enough to go outside to do some garden work, and in the meantime I somehow found myself listening to this. Marianne Faithfull, reading Byron, from her new cd. I said to John, What a wonderful thing to be at a point in your life when you can do something like this, unapologetically, and so beautifully. To say the old poems with ethereal music to showcase your voice. Last night I dreamed of my old mentor, Robin Skelton, dreamed we were both at an spring event, and I saw him across the hall with Sylvia, and thought, How can I go to greet them, having not been in contact with them all these years? (He died in 1997.) He once told me he’d met Marianne Faithfull in Dublin and how beautiful she was, how fragile. I think she was just out of rehab. And all these years later, her gorgeous voice, her perfect sense of timing, of phrasing. If I’d known about this recording earlier, I’d have found a way in the dream to put it into Robin’s hand. I imagine him listening, maybe with a glass of Jameson whiskey, saying, Jesus, the way he said it when he was overwhelmed. As I was overwhelmed, just now, listening.

And on that cheek, and o’er that brow,
So soft, so calm, yet eloquent,
The smiles that win, the tints that glow,
But tell of days in goodness spent…

3 thoughts on ““But tell of days in goodness spent…””