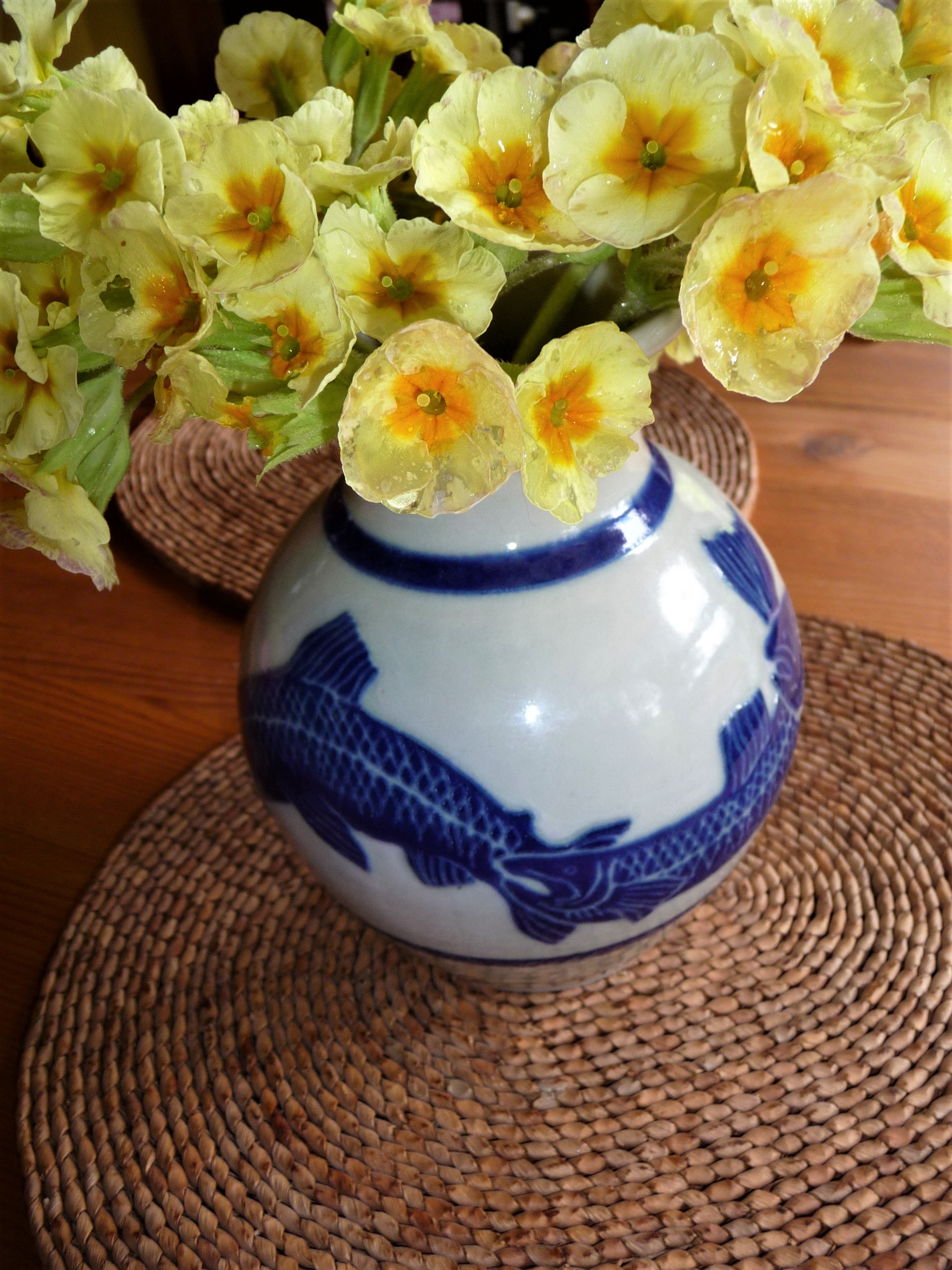 Some days a gift comes to you in an unexpected way. I had the pleasure of reading a couple of stories to my older Ottawa grandson (via WhatsApp) and his wide smile and bright face reminded me so much of his father at the same age. And there was his father! Coming to the screen to say goodbye as we finished our call, arranging another for tomorrow. There was a little sunlight after the morning rain so I went out to see what was what in the garden. The primroses were heavy with rain so I cut a few stems to bring inside. These are so like the wild ones I used to love in England and Ireland, the ones you’d see when walking on narrow lanes between hedgerows in spring. There were primroses (P. vulgaris) and their cousins, the cowslips (P. veris), and finding them in the lea of the hedges was like finding unexpected sunlight. Putting the stems of these primroses–and all I know about their provenance is that I once bought a single clump at a spring plant sale at the community hall in Madeira Park, which multiplied in many clumps, and I’ve divided them several times–anyway, putting the stems into a vase, I was suddenly on an Irish road with my son, the father of the boy to whom I read stories this morning. We were in search of standing stones and holy wells and we were using an ordnance survey map to find our way through a place I’d known more than 20 years earlier, unaware of the stones and wells because no one talked about them. They knew about them, yes, but why share sacred information with blow-ins? So on a day when it rained as we drove to our swim and then brightened, doubly brightened when two beloved faces looked at mine across thousands of miles, time also doubled, and I was driving with Forrest a road so narrow that the little car we were in was littered with fuchsia blossoms when we parked it by our B&B later that day. Here is a little of that day, from an essay, “Well”, published in Phantom Limb but before that in the online journal Terrain (and I’m linking so you can read the whole essay if you’re interested)

Slow is every foot upon an unknown path.
Irish proverb

We were coming back from Killary Harbour and Forrest noticed a number of things on the map which we could see by taking a third class road leaving the main road near Moyard. I stopped the car on the side of the main road because we couldn’t really see any roads where the map said one should be. Ah, we discovered, reading the legend—there are two kinds of third class roads: the ones wider than 4 meters and the ones narrower. This was one of the narrower ones so maybe it was that opening in the trees. And we turned.

After a short distance on gravel and grass, we came to a farm yard. The road appeared to go through the middle of the yard. Chickens were pecking at the ground and the ubiquitous black and white sheepdog watched us approach. Two men were talking in sunlight, dressed in suits, one with a tie and a Pioneer pin. I stopped the car and rolled down the window.

“Excuse me, we have a map which shows a road….”

They looked at each other and then at us. A few words were spoken between them. I got out of the car with the map.

“Is it a map ye have then?” Both of them came towards us as though I was carrying the relics of a saint.

One of the men, the one not wearing a tie, proved to have an extreme speech impediment but he was very eager. I think he told us that we were parked in his farm yard, that the chickens were his, the fields we could see. The other man, seeing my confusion, came forward to act as a translator.

“It is his land, to be sure. A road, is it? Ye’re wanting a road?” It seemed to baffle both men that someone might want to drive on a road that appeared on a map and which passed through a peaceful yard, geraniums in tubs by the door and a pile of straw outside a shed.

“We are trying to find some standing stones that are shown on the map. They look like they’d be in the open, near here. Do you know them?”

They exchanged words again with each other and the man with the tie said, “There is a stone, yes, in a field just down the road here. If ye stop and look over the neighbour’s wall, ye’ll see it in the field with the sheep so.”

“So this is the road we take?”

“It is, it is. It is very narrow and ye must drive slowly.” He was translating his friend’s concern that we would not be able to see if another car was coming but from the look of the road, no car had been on it for a long time. Primroses grew in the grassy patches between the gravel.

“No, we’re from Canada.” This elicted great delight, both of them reaching out to clasp my hands between their own, much nodding and smiling.

“And ye’ll be careful to drive slowly so?”

“O, yes, I’ll be careful. I’ve been driving for 30 years without an accident.”

“Thirty years! Never! Ye canna be that old to be driving so long so.”

“This is my son,” I said proudly. As though to prove my age, my tall son smiled from the passenger seat.

With that, we were on our way, nosing the little car between blossoming hawthorne which reached into the windows to tickle our noses with its sweet smell. It formed a dense hedge on either side of the narrow road with fuschia among it and the raised banks white with wild garlic, yellow with primroses. Birds sang unseen within its depths.