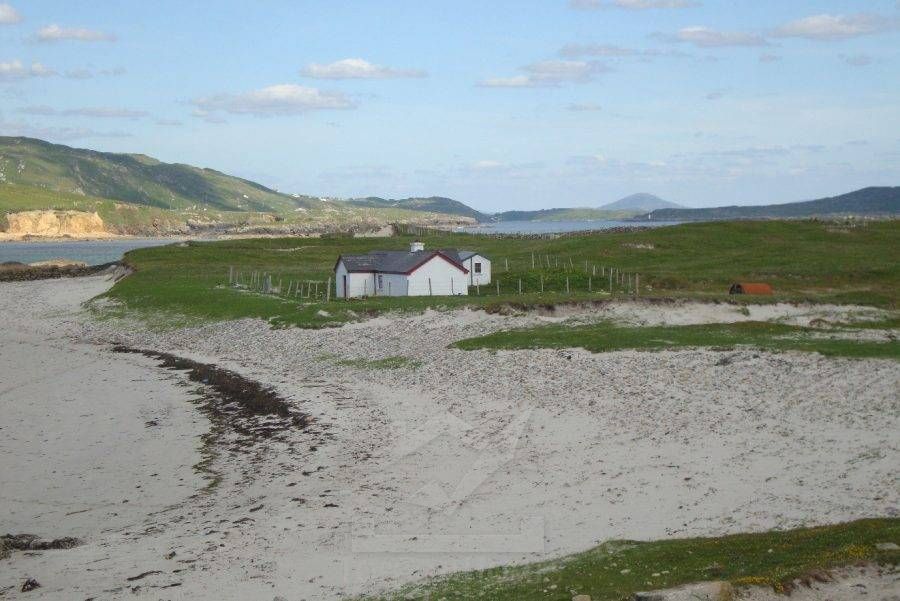 I’d forgotten what day it is today until I entered the pool for my morning swim and realized that the lifeguards were playing Irish music. And oh, my plans to focus on one difficult area in the revisions I’m currently engaged in, those plans, where I’d do my slow backstroke and think of better ways to arrange the material, those plans were washed away in the lilt of a voice singing me back to the year I spent on the island in the photograph. That wasn’t my house, mine was on the other side of the quay, but in summer, on the few days when it was warm enough, I swam off the sand you can see. That was the beach where the currachs waited as bullocks were herded into the water to be swum across the water to Eyrephort strand where they’d be taken along the Sky Road to the cattle fair. Just at the top right, below the dark hill, is the graveyard where I often walked among the primroses and wild garlic, stopping to read a weather-worn inscription in stone.

After that year, I returned to Ireland twice but never to the island. By the second time I was there again, the islanders had been relocated to mainland houses. Their ancestors had been driven to the island by Cromwell, or that was the story I was told, and by the late 1970s, the cottages were either empty or else owned by people who’d bought them as holiday residences. In summer, the island was paradise, though often a damp one. In winter, the air was grey with fog and turf smoke, though if the wind was right, you could hear a tin whistle or fiddle too.

The second time I returned, it was to do some research for a book I was writing, a novel partly set near Delphi, in County Mayo, north of Killary Harbour. My older son came with me and we had a little car so we were able to explore areas I’d never seen. We also had maps that told us stories I’d never heard before and I remember how surprised I was to learn the earlier history of that part of Ireland, a history shaped by passage graves and holy wells and megaliths. When I came back to Canada, I finished my novel, and I also wrote some essays about the experience of learning another layer of history in a country dense with it. Here’s a little taste of one of those essays, published in Phantom Limb, though if you’re interested, you can read a slightly earlier version of it here.

We had the Ordnance Survey Map Discovery Series 37. It showed numerous sites which I had walked by twenty years ago without knowing they existed. A holy well for instance, in Miceal O’Gorham’s very field, fenced in rusted wire and woody fuchsia, a sign now asking that no one enter because of Foot and Mouth Disease. I half-wanted to knock on Miceal’s door to say, Do you remember me and might we walk on your field? but something kept me from doing it. He had been a romantic figure to encounter on the road, a man with property, a wild Heathcliff profile, an ailing mother kept in a room off the kitchen. A handsome man, cagey in his dealings with cattle and horses, with a reputation for violence, a way of looking at women which disarmed them and I suspect disrobed one or two. So we walked up a hill opposite instead where, by following the contours of the map which remarkably matched the way the hill rose, we found a megalithic tomb facing away from the sea. Wind blew and birds trilled, and we sat on the rocks in front of the tomb where inside lay the bones of someone buried four thousand years earlier, a hip pierced with an arrow-tip, a pin dropped from a cloak long since disintegrated lying alongside. I lost my shoe in the bog as we returned to the car, and everywhere there was bog bean, marsh marigolds, the finished blooms of lady’s smock. When I woke the next morning, I knew immediately where I was, the sound of the town waking as familiar as my own household. My remaining muddy shoe, rinsed in the little sink in our bathroom, hung out the window. Desmond, with a tea-towel wrapped about his middle, brought us our breakfast and a steaming silver-plated coffee pot. Fine weather was promised, kind words were exchanged.
— from “Well”

So that’s where I ended up while swimming, the music taking me back, back, and even now, remembering, I can smell the turf smoke, feel the rough cut of words in stone against my fingers. Gone to God, remembered on earth. For thine is the kingdom.