Note: this was from October, 2018. Tomorrow we’ll head home after ten days in Vancouver where John had a bilateral hip replacement and sustained nerve damage to his right foot. I think we’ll both be relieved to be in our own territory again, among the light and the plants. 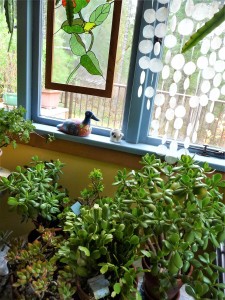 It’s autumn again, the year turning as the planet turns, as the ocean at Long Beach last week eased into shore and then retreated, the silver of it in morning light as lovely as anything I’ve ever seen.

I’ve been moving plants into the sun-room for winter. I always think this will take, oh, half an hour but of course the plants need to be pruned back, tidied, dead leaves shaken into a bucket. Some of them are the parents or offspring of things I’ve tended for more than 30 years. The jade plants, the scented geraniums, some succulents brought for me as Mother’s Day gifts at the local swap meet, a Meyer lemon I bought on a whim in 1987 and often have enough fruit from for marmalade. 3 huge epiphyllum cacti that bloom year round and draw the hummingbirds in summer when we hang them from the overhead beams of our deck pergola to shelter among the grape leaves and wisteria.

I came in to read Du Fu, his Autumn Meditations. Always the precise observation and always the sadness for friends gone, the summer only a memory, the sound of geese flying south.

as river waves rise up to the sky
and dark wind-clouds touch ground by a frontier fortress.

The chrysanthemums have twice bloomed tears of other days,
When I moor my lonely boat my heart longs for my old garden.

The need for winter clothes hurries scissors and bamboo rulers.
White Emperor City looms over the rushed sound of clothes beaten at dusk.

Yesterday I put my summer clothes away, lavender tucked into pockets. When John got up to make the fire and coffee, I heard him wonder aloud at the light over the patio, then his chuckle as he realized it was the wisteria leaves turned gold. It happened, as these things happen, as life happens, almost overnight. And every year we are startled by the unexpectedness of the usual. This morning, I thought, oh, I must ask my mother about something, and then realized, yikes, she’s dead. Has been for 8 years next month. But wasn’t only a year or two ago my parents joined us at Long Beach and sat on logs looking out to sea while our children turned cartwheels in the sand? One of the succulents I brought in was a Christmas cactus grown from a tiny slip from John’s mother. This year it’s loaded with buds.

As Du Fu noted, “Immortal companions share a boat, move on in the evening.” The plants come in and I find room for them under windows from a house built before the First World War, many of the panes still with their original wavery glass. That’s why my sight was blurry when I came downstairs. I’m sure of it.

4 thoughts on “redux: an autumn meditation, after Du Fu”