Note before reading: all morning I’ve been thinking it’s Sunday but it’s not! Not yet. Either I’m ahead of myself or behind or maybe time doesn’t matter at all. 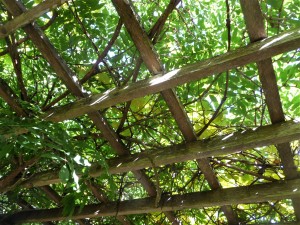 1. The French cloth has been folded and brought inside so that you’d never know that we actually had friends come the other evening for a distanced glass of wine with dessert. We sat out under the green roof, eating almond cake flavoured with zest from our last Meyer lemon, taking up a conversation that began 35 years ago either here or at their home on Oyster Bay or both places. A tree frog chirped from somewhere in the grape vine above us and there were hummingbirds in the fuchsia, a chickadee stepping over the lattice. When it was time for the evening to end, one friend asked, Were those swallows or bats gliding through the sky just as the sun set? And it was either, or both.

…evening, tipped
By the consummation of the swallow’s wings.

2. They brought a basket of plums and later this morning I’ll pit them and sugar them so they can sit overnight, soaking up the sweetness and the warmth of a vanilla bean; tomorrow I’ll make the jam from the Pays Basque to have in winter on toast or with sharp cheese, the scent of late summer rising from each jar as it’s opened.

We live in an old chaos of the sun,
Or old dependency of day and night,
Or island solitude, unsponsored, free,
Of that wide water, inescapable.

3. As I swam at 9 a.m., I realized that all summer the cedars have been my guides. Every morning from June until late September I begin at one end of the beach, using the four trees growing from a single root system as a starting point, and I stroke to the other end, maybe 60 meters, to where young cedars overhang the water. On these late summer mornings, there’s a patch of sunlight there where tiny grey flies dance on the surface of the water. I turn and return, watching for the cedars, turn and return, thinking about the months ahead, the dark months, the quiet nights, turn and return 10 times, the water cooler now, and bird tracks waiting to lead me out.

Grievings in loneliness, or unsubdued
Elations when the forest blooms; gusty
Emotions on wet roads on autumn nights;
All pleasures and all pains, remembering
The bough of summer…

6 thoughts on “quotidian: Sunday morning, with thanks to Wallace Stevens”